What is your earliest memory? Describe it in detail, and tell us why you think that experience was the one to stick with you. 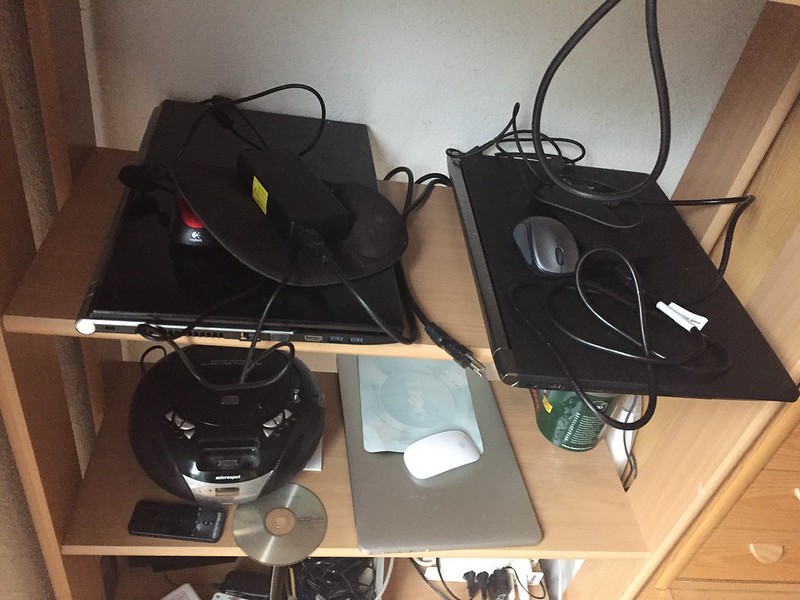 I have revisited my childhood so often on these prompts that it even bores me, so I am sure it is no longer fun to revisit and why revisit. Was it something great, astounding, spectacular? No, it was not. We did not have computers, not even a real TV, just a box in the corner of the room where you had to squint your eyes to see what was happening and it was all in black and white. Who wants to live in a black and white world? If you really want monochrome you can now do it all on the digital camera or in photoshop. Go back to my childhood?

My favourite shelf is shown on the photo. On the top right my new super Windows 10 computer which is still learning the ropes according to Mrs. Angloswiss. Next to it on the left my previous Acer model, still in working condition although with Windows 7 and a few loose connections which are not so bad if you waggle the lead a bit. On the lower shelf on the right, the silver computer known as Apple, which I am using at the moment to write this unforgettable work of literature.

So in all seriousness I ask you do I really want to return to a childhood where I was even lucky to find a spare electric plug for my tape deck which was the main possibility to listen to music in the days when the Beatles were still visiting art school and John and Paul were still wondering if a song with the title “Love Me Do” would make them famous. I remember recording “Top of the Pops” on Sunday afternoons to annoy everyone with the same songs time and time again.

No today is fun. I was already in my forties when I played my first game on a computer. Was it Kuony’s Rift exploring strange landscapes which never really lead anywhere and shooting down flying saucers which never actually got you to the final stage? I do not think anyone really got to the final stage. I remember sharing the Commodore computer, and afterwards the Amiga computer, with my youngest son. We would paint the wizard’s Kingdom with Wizzball. My son would go to bed earlier than I, and so I had the computer all to myself and must have completed the illustrations evening for evening.

Later I progressed to Facebook Zynga games. Then I was at the retirement age, almost. My company decided that a golden oldie did not look so good in the office, so they decided to give me an early retirement. I was then left to myself with the computer and spent many happy hours farming (Farmville), building a restaurant (Cafeworld) and even building a town (Yoville). This was my second childhood and let’s face it, not many of us get the opportunity to grow up twice. Even I outlived these games as they no longer exist. One day I discovered blogging and am still blogging. In my childhood it was called writing a composition at school, included in the english lessons. I hated writing compositions, the teacher always disagreed with my style. I am sure if they had given us a computer it would have had a more positive influence on my life.

Today we have iPads, a handy instrument for fiddling around with when not knowing what to do with your brain. We also have Kindle, so no longer visiting the library or the bookshop ad dragging a bag with a heavy book home. Just find what you want, download it and read it, even if you are on a journey somewhere. With your Kindle you always have something to read.

Back to my childhood? No thanks, just give me the muscles and joints that work and the legs that can take me on journeys to take my digital photos, that is what I need.
Posted by Pat Gerber-Relf at 16:26