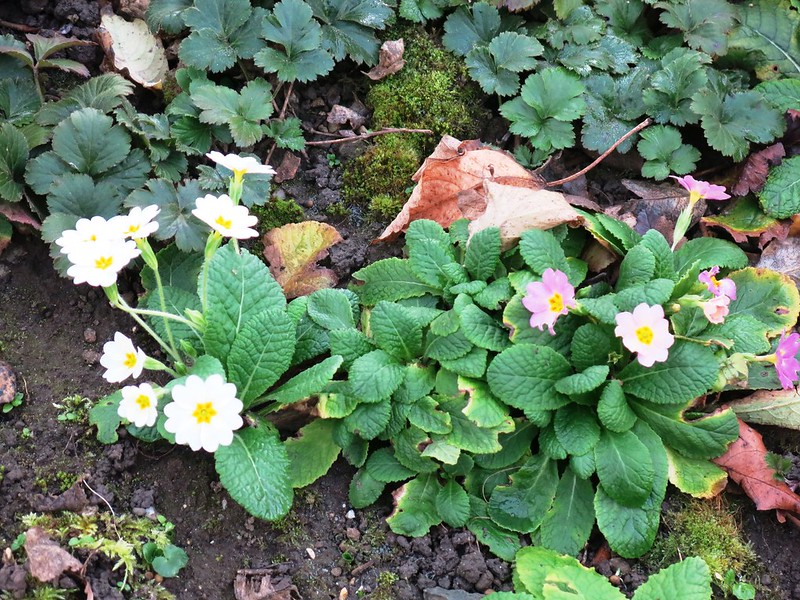 Yes, it really did. Mr. Swiss and I have been taking afternoon walks dressed in a lightweight jacket over a short sleeved t-shirt and we were still warm enough. Even the primulas are flowering which is usually the first ambassador for the Spring garden but it has been so warm that they decided to make a show again this year. In between on the photo you can see a couple of Autumn leaves which eventually decided to leave the trees. 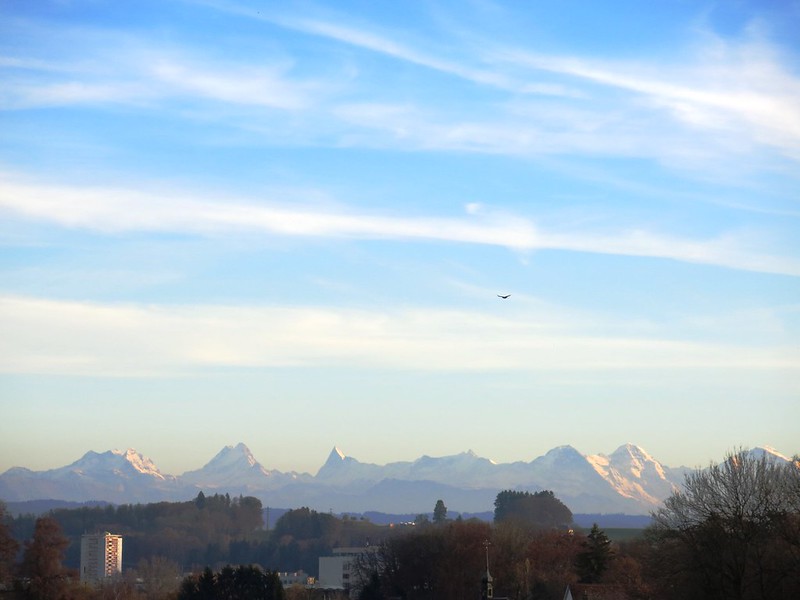 We have been rewarded with some fantastic views of the Bernese Alps in the afternoon. It would take about 90 minutes by motorway to reach them, but they look near enough to touch. Of course this whole Spring thing has a negative side. We have had no rain for at least six weeks and the streams have now dried out and so there is shortage of water. In some areas the farmers have had to organise lorries with water to feed their cows. We live in a fortunate area. Although the stream through the cemetery has dried out, there is still enough water for the cattle and the weather has been warm enough to allow the cows to graze on the pastures. 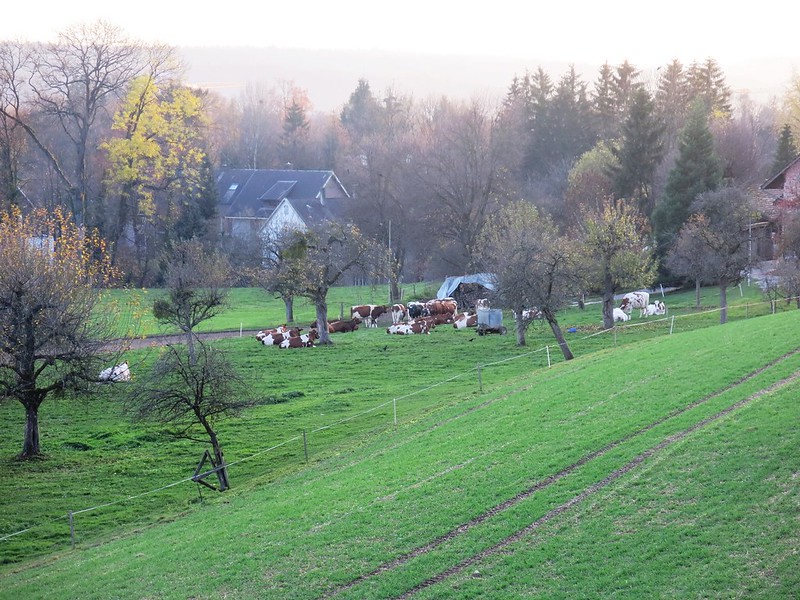 Mr. Swiss tends to find the Spring in the air quicker than I do, and so he walks the paths with a newly discovered joie de vivre, although I think he was doing it just for me to take one of those famous prize suspicious photos entitled “Lonely man on a field”. He is the dot towards the back in the middle of the path. I even organised the Swiss airforce to make some nice patterns in the sky. 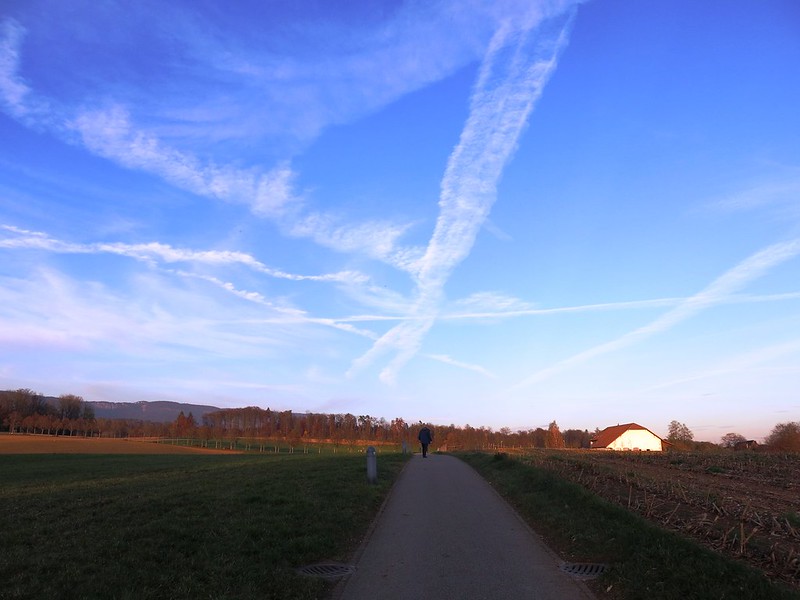 As the time passed by, two golden oldies were a little tired and so we discovered one of those useful benches which are probably only there for those they have to rest their legs in between. It was then I heard the sound of a gallop, a rider was approaching. My camera was ready and I waited patiently for the horse to pass with its rider. Isn’t it strange how the riders and the horses tend to have the same pony tails. 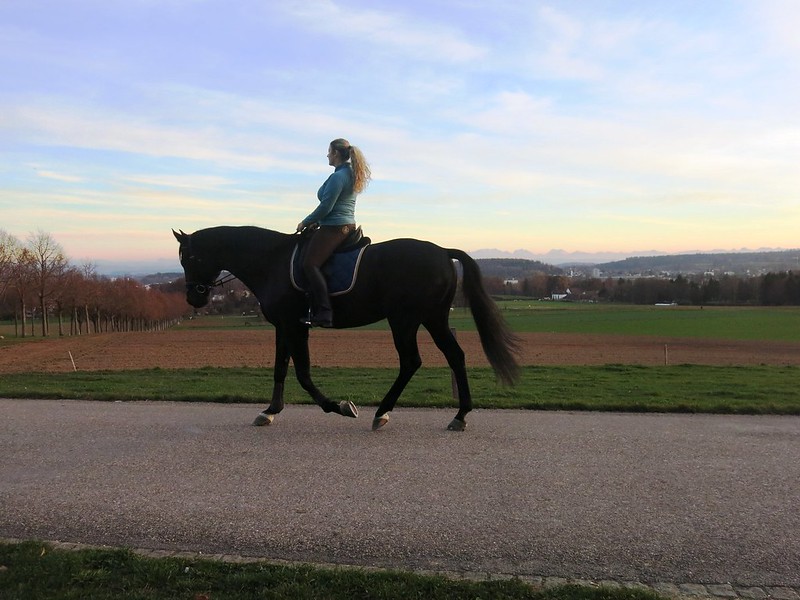 The days are now drawing to a close sooner since having to save some daylight time. This is a perfect opportunity to take some breathtaking photos of the sunset, especially with such wonderful Spring weather in Autumn. So, as the golden sun sinks slowly in the West of Switzerland, we make our way home for an evening meal and to upload the photographic captures of a perfect afternoon walk. 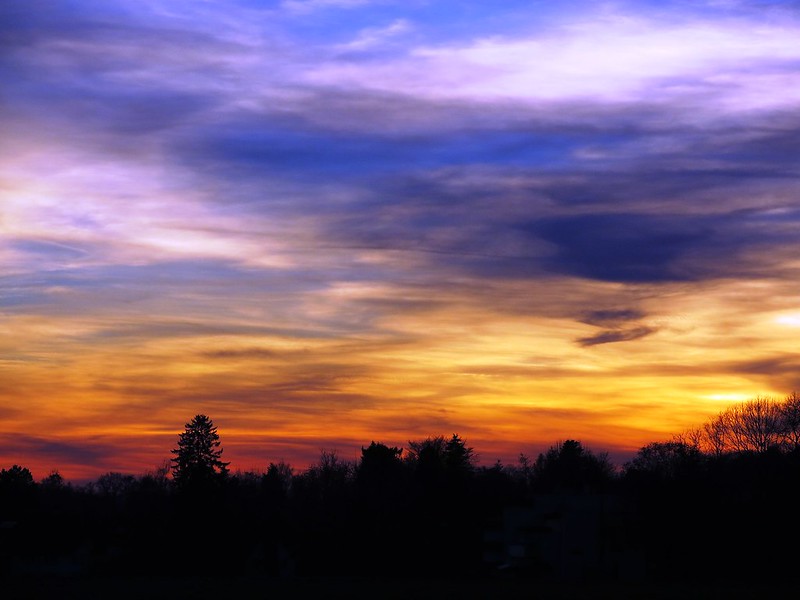