Daily Prompt: Singin' in the Rain

Safe inside, toasty warm, while water pitter-patters on the roof… describe your perfect, rainy afternoon.

There is no such thing as a perfect, rainy afternoon, you catch up on things that you wanted to do for some time, and sometimes things just happen that should not happen.

Yesterday evening it was not raining, it has not rained for at least a month and so this prompt is totally out of context. It is Autumn, the leaves are falling and so are other things. I was all by myself dealing with some iPhone photos that I had uploaded onto my online photo host and transferring them to my three external hard disks, as well as to the photo file on my 5 year old Acer computer which still works with its Windows 7 programme. What could possibly go wrong? Ok, I did forget to switch on the power after plugging it into the electric, so it was not astonishing that something went wrong.

I was suddenly confronted with a blank screen, not even blue, just black and it was dead, although I noticed a small orange light flickering at the base of the keyboard showing the last death throws. What do you do? You call Mr. Swiss of course, Unfortunately he was occupied with studying the news of the world and it was rather inconvenient. Eventually he arrived at my desk and said that there was no power on the computer. Feeling rather stupid, I switched the power on, the computer throbbed again to life with a large remark that it would recover what I was doing before it was killed by neglect and I continued with my work - no problem. And believe me it was not even raining.

This morning I struggled out of bed, dragged myself to the breakfast table with my trusty Acer and plugged it in. It was dead, there was nothing. It did not scream, cry, or even take a last breath. It was silent, nothing, de nada, null, rien. Mr. Swiss again came to the rescue but Acer was full, it had all the strength it needed, but had lost the thread somewhere. By chance Mr. Swiss had the same Acer which gave up the ghost some time ago with the letters. It only printed half the alphabet, but otherwise there were spare parts. We first of all exchanged his transformer for mine. This was not the CPR we needed, my Acer was still dead, no sign of life.

Mr. Swiss then had a brainwave. It could be the battery. After 5 years these things happen and so we removed the battery from his ailing Acer and exchanged it with mine. 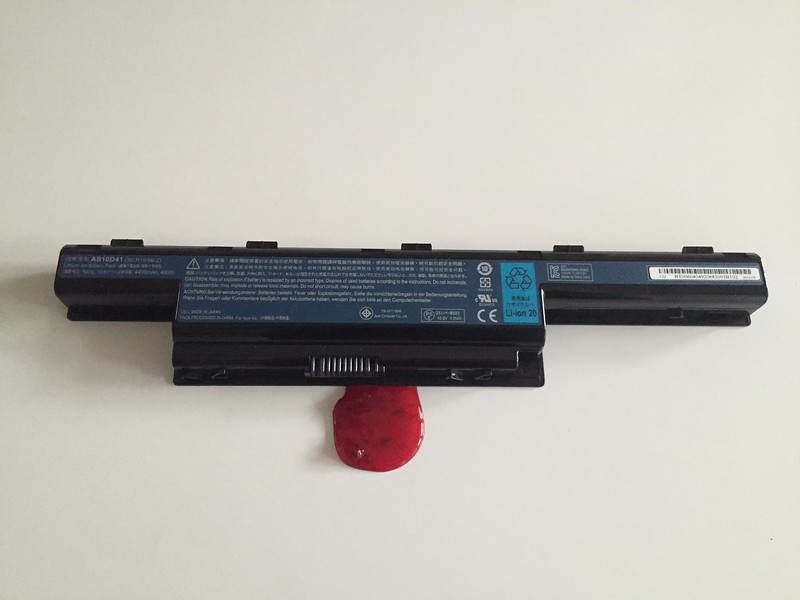 As you can see mine was injured, it was wounded, losing its life’s juices. To be quite honest I created this photo. The  battery is the one that was dead and I added some raspberry jam to make the blood look more authentic.

We inserted the battery from Mr. Swiss 5 year old Acer and my Acer was again alive. It was breathing, making noises of rushing air and above all it had a living monitor. I could see letters, words, photos, Facebook, Wordpress, the grid, it had returned. My Acer was alive. To ensure that this became a permanent condition, Mr. Swiss checked on the Internet to see if we could buy a new, untouched, battery for my Acer. Within minutes a new battery was ordered on line, actually two - you never know.

If it had been raining it would have been a good way to pass time, but it was breakfast time, I was busy covering my cereal with milk and drinking my cup of tea and had no time to look out of the window to see how the weather was.

It was pure excitement this morning, but we did it. We revived my Acer. It seems that these batteries do have a life span but they are not capable of giving a warning like “I will die tomorrow morning” or “replace me”. They go silently without a scream or noise.
Posted by Pat Gerber-Relf at 17:24