Who was the first person you encountered today? Write about him or her.

I am married since 47 years and there were very few days in those 47 years that I did not meet Mr. Swiss as the first person of the day. We live together, sleep together, eat together and even shop together. Now and again we go our own way. I do not practice drums with Mr. Swiss in his rehearsal room, where he is at the moment and he does not sit next to me when I am writing my blog. He has his own computer for his own interests. I am not going to write about Mr. Swiss because he does not want me to write about him, and I do not want to write about him. I have other things to write about. I am not going to post a picture of Mr. Swiss here because he does not want me to post a picture here of him and I don’t blame him. Of course I meet other people during the day. 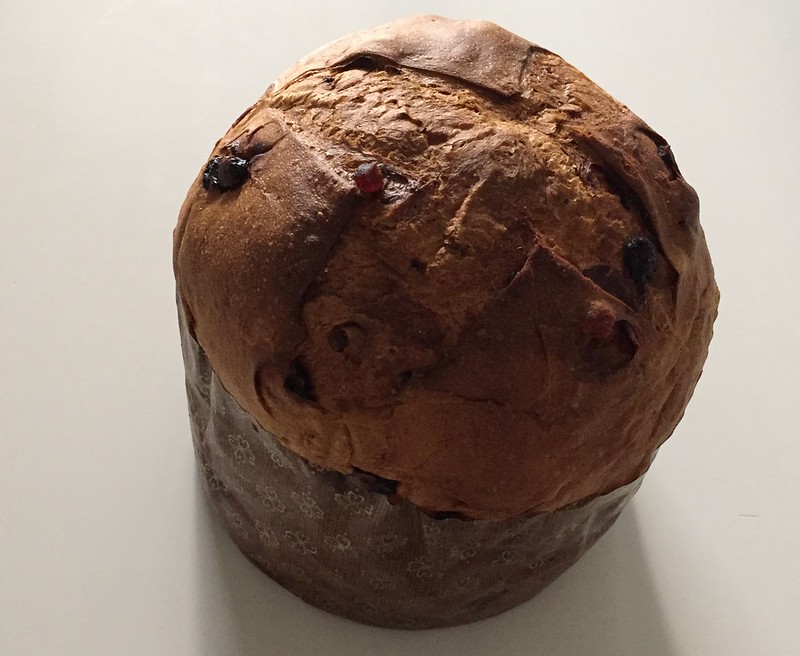 This is an italian style yeast cake known as a panettone continuing various dried fruits. It is an Italian speciality. You can also buy them without fruit and it seems they are a speciality at various festivals during the year. I bought one today because they were 30% cheaper, costing only nine swiss francs and Mr. Swiss and I are partial to a light sweet refreshment in between meals.

I met a lot of people today in the local supermarket, almost too many, but I did not really know any of these people. They were fighting to buy goods that had been reduced in price. When we arrived at the supermarket we found the illuminated sign by the parking places showing “0” meaning there are no places free, although we discovered after cruising around some people had left already. What was wrong? It was just a normal Friday, but wait, no it was not a normal Friday. In Switzerland we generally do not import things from the States We do not do 4th July, halloween or even Thanksgiving. We love our turkeys, treat them with respect and would not even think of roasting that lovely bird for Christmas, at least not many of us do. We have our own way of life, at least I thought so until today. Yes, we have become victims of black friday. There were signs everywhere to remind us. Why black friday has been exported to Switzerland I do not know, but it probably has something to do with making profits of some kind.

The local supermarket shot the bird down (a Swiss way of talking - nothing to do with turkeys, long may they live) by telling us that all toys were 30% cheaper today. If my offspring were in the toy age I would probably have joined in. Christmas is just around the corner and stocking up on lego and play bigs for 30% less than the normal price is a bargain. Even an electric railway or grand prix racing car track would be worth the black friday. Perhaps children no longer have fun with such boring toys and are more into the digital toys. No problem: the online company where you can buy such “toys” were also offering 10% cheaper today, after all it is black friday.

Yes, Black Friday was the first person I encountered today.: on my computer, at the local supermarket and for my break at home in the shape of a panettone. Perhaps telling you all about Mr. Swiss would have been more interesting, but he prefers to remain in the background. He was not a black friday bargain, he just came with the marriage licence.
Posted by Pat Gerber-Relf at 16:07