When you were 10, what did you want to be when you grew up? What are you now? Are the two connected?

I would have like to have become a secret agent, something like James Bond, but they were not recruiting at the time and my family did not have connections with the British Foreign Office: growing up in a working class family where dad worked in a factory and mum either didn’t work because she had me to look after, or eventually also worked in a factory. I rememberer first job in a factory was sewing loops on women’s intimate articles needed once a month. She could not tell me what she actually did, but explained it by “working on a sewing machine”. Later she moved on to shop assistant in Woolworth’s, a chain of shops in England originally from the States, which no longer exist. And me? I was still dreaming of becoming a secret agent and so I eventually settled for the British Police Force, although I did not really like the uniforms. I actually visited the local police station  a few years later, when I was 16 year old, to make enquiries how it could happen, and that’s that.

I found this prompt boring in August 2013, and now they are really scraping the bottom of the barrel. It has now, more or less, got to the stage where I just take part, but my heart is not in the matter. Daily Prompt are you really running out of ideas, why are you doing this to us?

This morning Mr. Swiss and I did our Monday morning shopping trip; nothing special, but there were a few things we needed such as food. On the way in the car I watched the passing scenery. It was cold, no snow and a little dismal, but I could see the Alps in the background. Seeing the alps where I live is no exception, they are big and in the right light they poke up. Mr. Swiss said that it must be a south wind blowing to see them so clear. I again admired his sense of meteorology. He always has an explanation for everything. I often thought, when we watch the weather forecast on the TV, that a meteorologist would have been his dream job. He knows so much more that the men and women who tell us about how the weather will be.

“Oh look, it’s that idiot again. Yesterday he said it would snow and there is still no snow.” “She told us last week it wouldn’t rain, and since it hasn’t stopped”. If only he had studied further in the university. He is so good at it. He would definitely have been a success on the television and radio telling us what to prepare for.

After we had completed our shopping trip, which went quite smoothly, we left the supermarket, the entrance being on a higher level than where we had parked the car, so it was the chance for one of my prize suspicious photos of the swiss alps in all their glory. “What again” I can hear you saying. Sorry, but it was either the Swiss Alps or Mr. Swiss and he was not in such a photographic mood today, so here are the alps taken from the upper parking space of our local supermarket. I have better photos on my real camera, this was just with my iPhone. 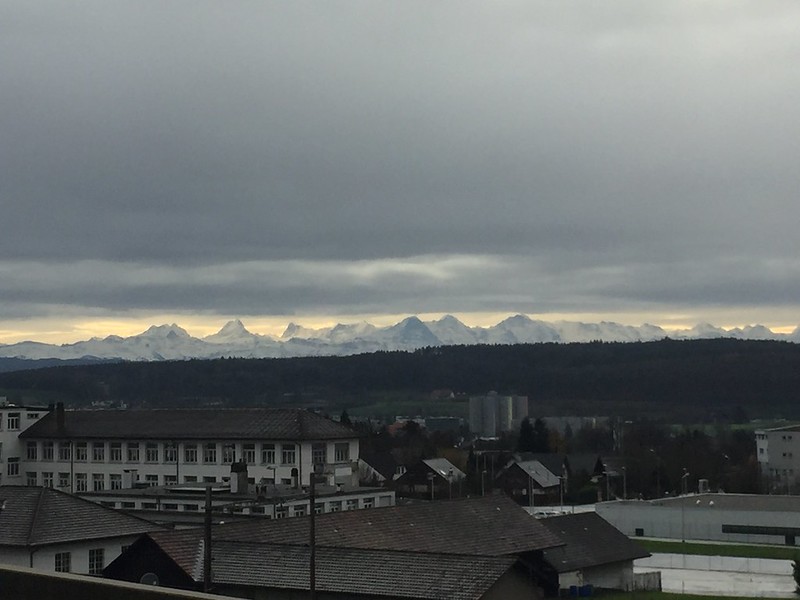