You’re locked in a room with your greatest fear. Describe what’s in the room.

No daily prompt? But that never happens, they might be late, might be forgotten but like a bad penny they turn up daily, usually something we got a couple of years ago, so is the life of a blogger.

I no longer have greatest fears, so I decided to see what fears were in wait for me today when I awoke from my golden oldie lunchtime sleep. Lately Mr. Swiss and I have acquired the daily habit of taking a snack when we return to the normal daily awake life and today there was nothing in the cupboard or fridge. Yesterday we had a piece of cake, with cream and meringue. I was not really hungry, but there must be something. It was like being locked in a room with nothing to eat. I then remembered a suspicious box in the refrigerator that appeared some time yesterday between dusk and dawn.

It was a box of something known as After Eight, chocolate covered creams, usually the peppermint variety, bit this time I noticed they were orange flavoured. I am quite partial to orange flavours.

“Mr. Swiss do we have some sort of speciality to eat?”

“What about those After Eights?”

I do not need a invitation, I was already on my way, opening the fridge door, my fingers clutching, no embracing the box. It was then that I met the first obstruction. 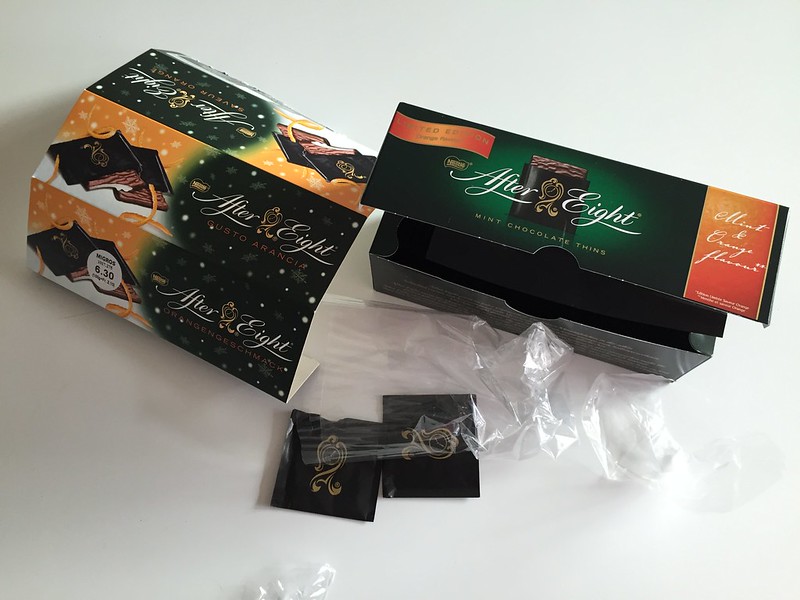 It was a special Christmas edition, orange flavoured. I noticed it was packed in plastic, but that was the first obstacle to overcome.The box was not only packed in plastic, but there was a second cover over the plastic. There we had it - a locked box. Now the fun began. I really did not want to destroy the package, but I was hungry, my yearn for an orange flavoured chocolate covered After Eight knew no bounds.

“How am I suppose to open this?” I asked, not wanting to spoil the cardboard cover.”

Arn’t men clever, they are so logical with their ideas.

I began to cut through the cardboard (see photo of cut cardboard) and now I had reached the core of the surprise. A box of After eight still incarcerated in plastic.This was not 1984, this was a step beyond: pure torture. I cast a quick glance at the walls and recesses of the kitchen. Was there a camera? Was Big Brother watching me? No, just my cat wondering why humans have to be so complicated.

I knew my target was now within reach. My taste buds were already in preparation. It was just a matter of removing the plastic which usually has a sort of red stripy thing to pull, facilitating matters of removal. This seemed to be an exception to the rule, there was nothing to pull and my fingers were slipping and sliding until with a ruthless grip, and a small profanity (words always help) I tugged at the plastic where I noticed it was stuck together. The plastic was torn apart quite brutally, in 2 or was it 3 pieces, floating to the ground. I bent to remove it from the floor - the most difficult part of the operation.

I was nearly there. I opened the box and found it full of packed orange flavoured After Eights. After the work involved, I decided that just one piece was not worth the investment, so I took two and now I am writing my daily prompt. My greatest fear was not the locked room, but the locked box of After Eights.
Posted by Pat Gerber-Relf at 16:07