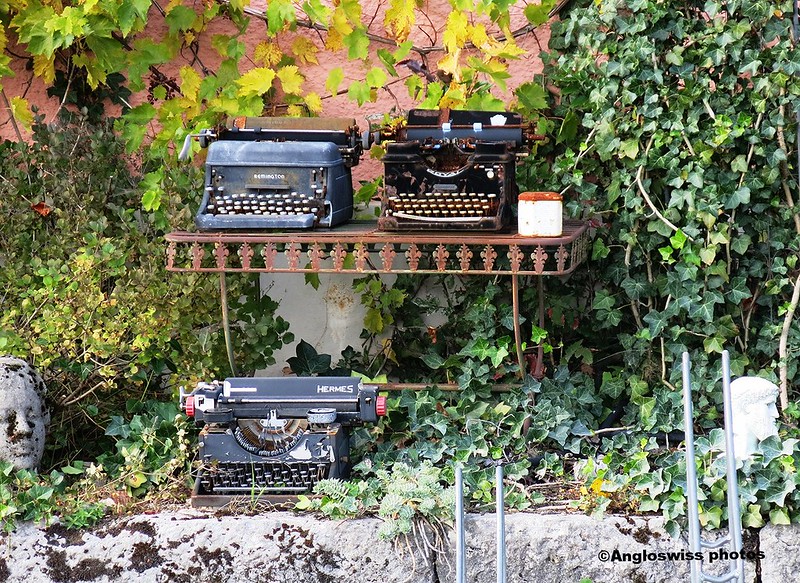 “I don’t feel safe sitting here outside at all.”

“Stop complaining Remington, at least we are still alive. The rest of us were thrown on the scrap heap a long while ago.”

“Not all of us, the exclusive models with value were kept in museums. Most of my relations were considered to be something special.”

“There she goes again, just because she is called Royal she thinks she is something special. I am a Hermes and remember the days when I was something important. I was kept in a newspaper office you know.”

“So tell us all about it just to calm you down. Your keys are already shivering with nervosity.”

“Nervosity my ribbon, I am cold outside here between the bushes. My big break was writing all about the Hindenburg disaster in 1937 when the airship exploded. Oh, they were the days. I was a proud Remington.”

“That’s nothing, I saw the beginning of the second world war as a Remington and was used every day. Did you know that Ernest Hemingway touched my keys for typing his manuscripts?”

“And what about me, I belonged to John Steinbeck before he sold me to Jack Kerouac and then he took me on the road. We Royals were irreplaceable - then.”

“And now look at us, me Remington, a Royal and a Hermes all sitting outside in a garden restaurant.”

“Let’s be glad for small mercies Remington, at least we are still alive and typing and not fallen as a victim to the computers. I was the victim of an IBM Selectric typewriter, but even those typing balls are now extinct. It was not even worth preserving them.”

“Oh, my ribbon and keys will get wet. I might even start to go rusty.”

“Stop shaking Hermes, you are really a nervous pres. We have been through too much to be worried about some rain. When I think of the days in a nice little office, being typed by nicely manicured finger nails with their red polish. Although some times the secretaries would be a little annoyed when their fingers slipped between the keys. Ting, ting went my bell each time she reached the end of the line and would pull the lever to begin again on a fresh line. Oh, those were the days, I so miss them.”

“True, there are few people that realise how good we were at our job. We were the best. “

And so I discovered the three typewriters yesterday on a walk, all sitting on a shelf outside a local restaurant. I revisited my first days working as a shorthand typist in an office. We only had the so-called manual machines, of course not such antiques as these machines, but there was no electric cord, it was all typed by hand. Eventually we got the IBM Selectrics, a revolution with their ball and the metal letters and then….. yes the computer arrived. Who needs a typewriter today, they only made things more nervous for the press, but I just had to take their photo.
Posted by Pat Gerber-Relf at 17:08