If one experience or life change results from you writing your blog, what would you like it to be? 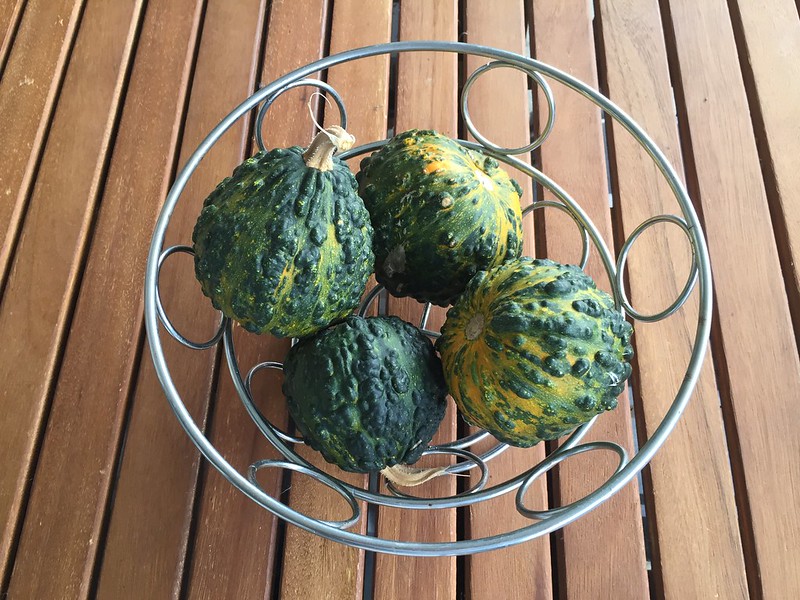 Nothing much has changed since I last wrote this prompt on 12th July 2013, except for the fact that perhaps a few kilo more have added to my body weight and a few more grey hairs have appeared. Otherwise I am still the same golden oldie, queuing with the others and waiting patiently for my place in the blogging hall of fame. I once read that posthumous recognition is a great honour. The disadvantage being that I will not be there to accept my deserved award, be it the Nobel prize for blogging literature or any old Pulitzer prize, I am not fussy really. There are rumours that I might be awarded the Golden Gourd based on my results in the garden.

There were actually to be at least 20 varieties of gourds growing, but unfortunately due to the mass invasion of snails in April all my shooting stars were massacred by their 14,000 teeth and their were only the bare stalks left, except for one plant. It was a late comer, hiding from the oppressors and battled its way eventually. Admittedly they were not the most attractive gourds, but they survived the fight and are now sitting in a dish outside on the porch, until they succumb to the process of disintegration.

So what is now left? That perhaps one day some person might discover my blog, wipe the cyber webs away and find a glimmering light of hope. I have left my traces everywhere. At first they were on Yahoo 360, my beginnings. Unfortunately and probably when the Yahoo people discovered I was blogging there, it was decided to discontinue the site. It seems there were less and less people interested in taking part. Do I really have that effect on people.

So I moved on to where everyone else seemed to be moving to. A place called Multiply where I met some other refugees from Yahoo. We were a happy group with all sorts of shapes and sizes: writing groups, photography groups and even poetry groups. I do not know exactly why, but one day the owner of this Multiply place moved to Indonesia and began to invest in marketing. I decided I did not want to buy a second hand pair of shoes from Asia, or even a special offer of pyjamas. Gradually the rest of the blogging world came to the same conclusion and one day the owner of Multiply discovered that he was slowly slipping into the world of bankruptcy and so Multiply died. Luckily I had already started a back up in Blogger and even in WordPress. I quickly backed everything up in Blogger, but decided that WordPress would be my future in blogging.

Little did I know then that the blogging experience in wordPress is based on repeats, but where there is a will there is a way, and so I continued disregarding doing it all again. I always found a different approach to the problem. My Bogger site is still there surviving my backups from WordPress. You never know, never trust a blogging site, they might want to expand, throwing out their bloggers on the way and thus disturbing any chance of a well deserved prize for your efforts. Of course I am also in Facebook. I mean everyone is in Facebook. If you are not in Facebook your computer life is not worth suffering, or is it?

In the meanwhile if you are bored and have nothing better to do with your time, just make a search in Internet with the words “Angloswiss” or “Tabbynera” and you will find the story of my blogging life. Pat Gerber-Relf will do it as well, but that is the real me, the most boring part of my computer life. I just discovered that I am also listed in Google. I often have doubts that I actually exist in flesh and blood.