Daily Prompt: Saved by the Bell

Tell us about a time when you managed to extract yourself from a sticky situation at the very last minute. 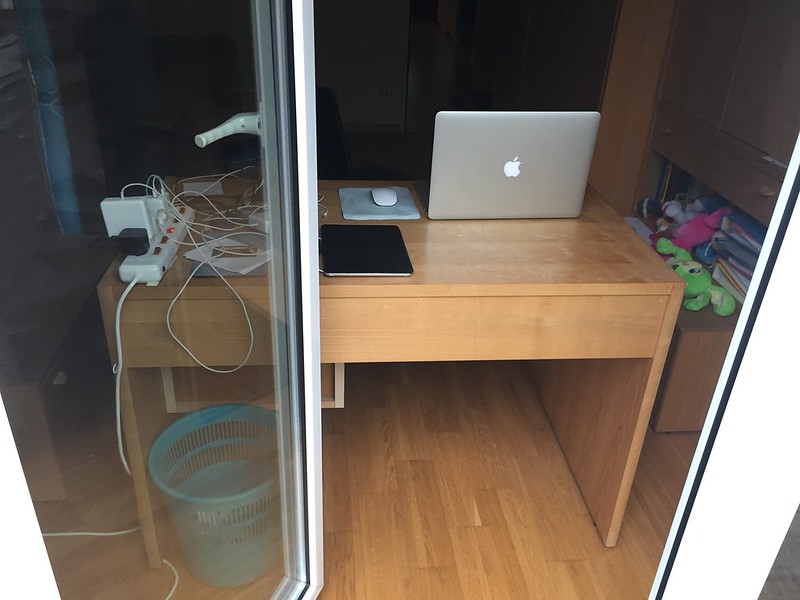 Where is she? What has happened? No-one there, a computer waiting for a feed, something to tell everyone. This is repeating itself every year, there is no escape. The sticky situation is sticking all over the place. Actually the sticky situation is caused by the remainders of a chocolate muffin with whipped cream which I removed before taking the photo.  But Mrs. Angloswiss is nowhere to be seen. Is she removing the muffin crumbs, was she kidnapped by a rival daily prompter that decided her prompts were becoming too repetitive? Perhaps she just decided not to write a prompt today?

The solution is quite simple. I took the photo from the other side of the window in the garden to see how my centre of operations looks from a different angle. It is becoming increasingly more difficult to write something original and completely different as the prompts seem to be re-appearing thick and fast, so fast that I wonder why I bother.

My day is full of sticky situations from the moment when I awake. Will I make it out of the bed or not? I usually do, but just standing does not do it. You have to carefully make a few swinging movements until realising that standing would no longer be such a problem. When sticky situation No. 1 is conquered and the day begins I realise by the end of the day that I have survived.

Bells are actually a rare thing today. I did have one on my iPhone, sounding like the good old telephone ringing as it used to be. Now I have a sort of sing song theme. The main thing is that I hear it and it is usually turned to full volume, I have tried them all..

It is quit amusing when someone calls and you are in a public place like the supermarket. Everyone puts there hand in their bag or pocket and pulls out their phone. “Was it mine” they think and you notice the people that have the same bell as you do. I remember when there was a repair man at home, for something in the kitchen. His phone had the same signal as mine and those repair men receive calls on their mobile permanently. Every time his phone rang I thought it was mine. Now and again Mr. Swiss decides to alter his calling tone and then I have to be careful as he might choose my theme. The smartphone rings and we all rush to answer it. Imagine the disappointment when it is not yours.

Of course the solution is to let it vibrate. That adds to the excitement as you can actually feel that someone somewhere wants to contact you. Drawing to a conclusion on this boring theme, people today are no longer saved by bells, they have other methods divided into various categories. You have a theme for an SMS tone, a voicemail, an e-mail. Even if you send an e-mail it makes “woosh” as if it is flying through the air. You can get a “tweet” signal if you happened to tweet. Facebook posts zlsch and calendar hints have an accord, as well as a reminder. It says I get an impulse when I have an air drop, but I do not do air drops, I like to have a clean atmosphere.

To be quite honest, I turn it all of these off. Now on my iPad it is something else. My iPad accompanies me throughout the day. It can get a little annoying in the evening when reading a book, or Mr. Swiss is watching the TV and I get a sort of “ding-a-ling” to tell me someone somewhere has passed a comment on a daily prompt, but let’s face it, it is all part of modern life.