I had one of my famous falls in the morning where I thought I had broken my toe, but did not, it was just painful. I also managed to drop my Acer computer on the floor which I was carrying at the time. The computer survived and so did I.There was no imaginary friend to warn me or pick up my computer or even me. I need a guardian angel to tell me that these things could happen. I had a Mr. Swiss to pick me up but things do not get easier as you both grown older and heavier.

I wish I had an imaginary friend that would write my prompts with energy and new ideas, then I would not have to think up something new daily. Today after my golden oldie sleep, Mr. Swiss said I have to go to Subingen to get new knives for Mowey (another imaginary friend - our lawnmower) and we could visit the Inkwilersee on the way home (a lake nearby). I had already sort of half decided to tell the daily prompt to get stuffed today, I just did not feel like writing, especially after seeing what the prompt was. I waved goodbye to my imaginary friends, they did not wave back, but I did not expect them to. Mr. Swiss and I departed in our car.

We decided to take the scenic route, which was not really scenic but instead of the fast straight road, we drove through many small villages. Starting in Feldbrunnen, we crossed Riedholz and approached Derendingen through Luterbach. On the way to Luterbach we crossed the River Aar. There was a traffic light because some sort of construction work was being carried out. Unfortunately the sun was shining on the light and we were three cars waiting for the light to change. After 10 minutes the gentleman in the car in front of us examined the light, discovered it was not connected, shook his head in desperation and drove off, telling the car in front of him that the light was not necessary. We were glad because we were becoming rather impatient. Luterbach became quite famous as it was the home town of one of the late Swiss ministers, Willi Ritschard - just saying. Actually we wanted to go to Subingen, but knew that after Derendingen we would have to drive through Deitingen, commonly known as Kofmehl/Kofmel land, because 99,5% of the villagers bear the surname of Kofmehl/Kofmel according to which Kofmehl/Kofmel you were descended from. It was after Deitingen that we discovered we had passed the road to Subingen without noticing that it was there and were already on our way to Wangen, which we did not want to visit.

Wangen was too far away and its only real mark of fame is the army recruit school for grenadiers and that sort of thing. Mr. Swiss just tells me that it is not longer there. Anyhow, we did not reach Wangen as we turned back to Deitingen, still not seeing the road to Subingen, and stopped opposite a large farm house, which was the only photo I took on my odyssey. 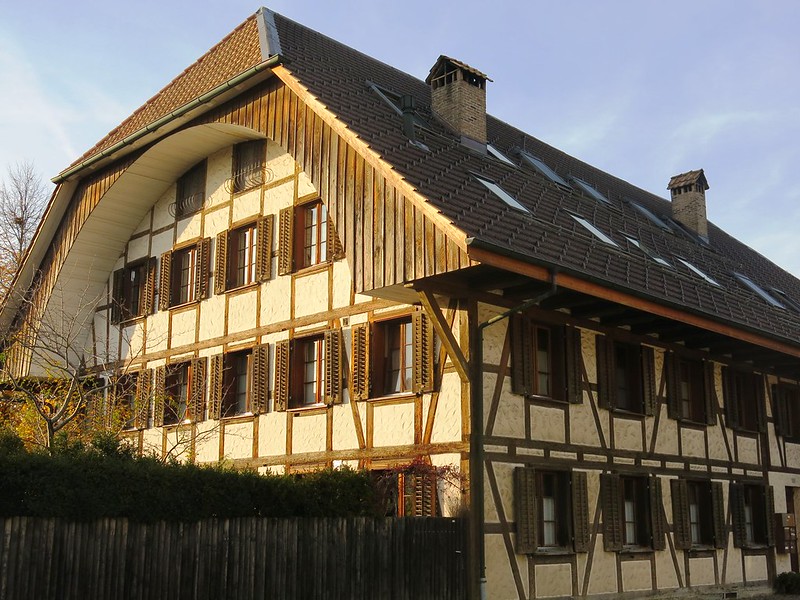 t was in Deitingen revisited that Mr. Swiss asked in a shop with the name of KomeHl of course, where the road to Subingen was. We were told to drive further down the road and it would appear. It did appear, but we noticed that Subingen was not written very clear but Kriegstetten was and we knew that Kriegstetten would have come after Subingen. We also noticed that there was a road clearly marked to Inkwil from Subingen, as we actually wanted to visit the Inkwilersee after we had bought the knives for Mowey in Subingen.

So now we were in Subingen and again were lost, not knowing Subingen. Mr. Swiss knew that the shop we wanted to visit was Gewerbestrasse 4, but we did not know where Gewerbestrasse was.  We knew it was near the Landi which was a large agricultural supplier and we than saw the Landi, a very large complex at the beginning of the Industrial quarter of Subingen. Are you with me? Doesn’t matter. We found the shop with the knives and then proceeded to Inkwil, driving in the wrong direction, but we turned and carried on regardless. The Inkwilersee was on the outskirts of Inkwil but we had to drive through a forest, one of those forests that never seem to end. Eventually we left the forest and then missed the road to the Inkwilersee, It was then approaching 4.30 in the afternoon so we decided to return to Feldbrunnen and home.

Oh how I hate these daily prompts. If I am not here tomorrow it is because I might have gone somewhere and got lost on the way.
Posted by Pat Gerber-Relf at 19:20