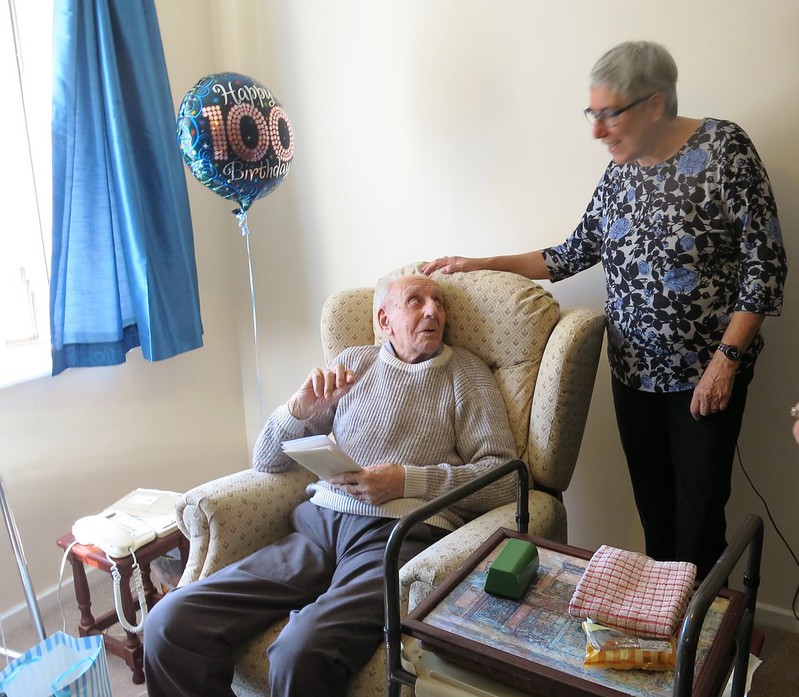 I often have a feeling that the topic generator is psychic, mystical, some sort of a link to my writing. Today I got a glorious break, after a week away from the computer, prompts, writing and everything. I was offline spending a week in London to celebrate with my dad his 100th birthday and here is one of the photos. Dad and me in his apartment with balloon and enjoying the day.

He lives in an extra care home, has his own four walls with kitchen bathroom, bedroom and living room and is so well looked after that I can relax. I live in Switzerland, he lives in England. Our normal contact is by phone and once a year when I visit him, usually around 24th September when it is his birthday.

This year was a special birthday, he was 100 years old. He can no longer walk so well, usually has the support of a Zimmer frame and if he has further to go someone takes him in a wheelchair. There are a few apartments where he is, all elderly residents, and once a week there is a special traditional english dinner for those that want to participate and twice a week in the afternoon a lotto game.

I arrived at my dad’s place on his birthday to discover that the local newspaper were already there taking photos. Today it was in the newspaper so being so proud of my dad here is the link to the article

I think that covers most of the main events in his long life. He would tell me stories of his war service, of his early days. His jazz from the 20’s and 30’s was my musical background. Of course the highlight of the morning was when the postman called with the telegramme from Queen Elizabeth. It is a custom in England, but as she does not know personally when all her subjects have their 100th birthday you must organise it. In my dad’s case he had a visit from the local government who took all the particulars. My dad is a real special case. He never had a big thing about the Queen, she was just there, but when the card arrived he was really excited. I noticed he was looking at it now and again and re-reading it with the comments “I wonder if she sends a lot of those cards?” etc. etc. He also got a card from the British government minister of pensions, although no-one is really a fan of his, so that was put on one side, although I must say it was a nice card with a view of Tower Bridge.

He had visitors all through the day and in the afternoon the home where he lives had organised food and drink and a birthday cake and there was a little party for him in the main hall. The great thing was that although my dad is the oldest where he is living his memories of the early days are also the memories of his co-inhabitants, so there was no lack of conversation. 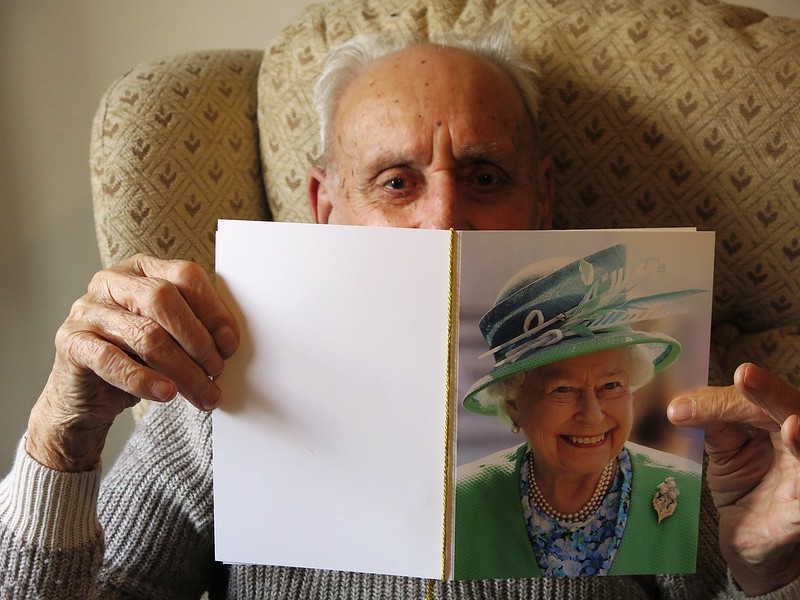 When I left him in the evening he was tired, but very happy and probably looking forwards to his Lotto match the next day in the afternoon.

Yes it was more than a glorious break and dad still wonders how he got there.