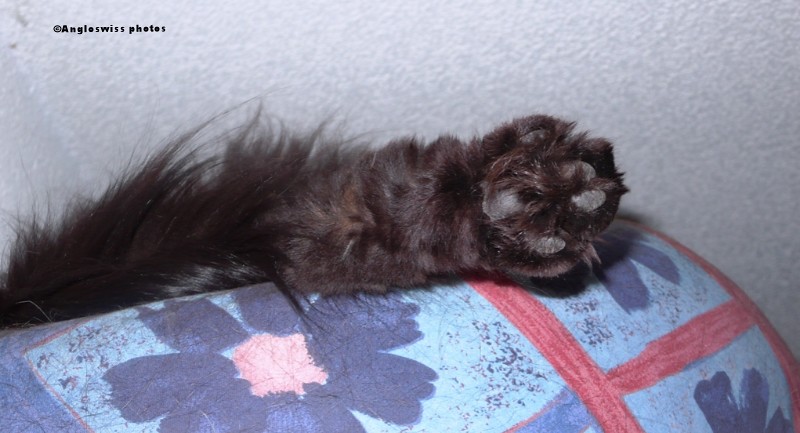 Angela heard it again. A repetitive scratching noise at the door, accompanied by a meow, although a very weak meow. It was a very cold evening and she had a heart for animals, so she looked through the window. She saw the sweetest little black kitten she had ever seen.

“Oh you poor little thing” she said as she opened the door.

She wanted to take it in her arms and give it some kindly strokes, but the kitten repaid her kindness by a neat clean scratch on her hand and jumped onto the armchair in front of the fire and began to purr.

“Oh, you poor little thing” she said. “Where’s your mummy?”

Of course the kitten gave no answer, generally cats do not talk or understand. Angela decided it must be hungry, but all she had was two pieces of liver for tomorrow’s dinner. She decided to give the kitten half of one of the pieces of liver. The kitten looked up, saliva was dripping from the corner of its mouth. Angela placed the liver in a small plate and even garnished it with a sprig of parsley.

The kitten regarded the meat and the parsley and then pounced. In a few seconds the liver had disappeared and instead of saliva running from the corners of the kitten’s mouth there was, of course, blood. Oh and the kitten also spit out the parsley with a strange sound, something like a hiss.

“Well you seemed to like that” said Angela, not really awaiting a reply. She decided to have another try at stroking the kitten on the head. This time it purred and began to lick Angela’s hand where she had the scratch. It began to bleed again from the rough tongue of the kitten, but this did not seem to disturb the kitten and it continued until the scratch was no longer bleeding, even the skin seemed to heal.

“Well look at that” Angela thought “what a kindly and gentle kitten, it has licked the scratch away”.

It was then there was a knock at the door. On the doorstep there stood a very tall man, dressed in black with a red rose in his jacket. He looked at Angela and smiled. At least she think he smiled, his eyes seem to change colour to match his rose and his lovely sinuous red lips parted showing a wonderful row of perfect white teeth. She was a little puzzled to see the corner teeth were somewhat longer than the others.

“Please excuse the disturbance at this late hour” he said. Yes, it was now approaching 11 in the evening. “My cat is missing one of her kittens and she lead me to your door. Could it be that her kitten found its way to you.”

“Is it a black kitten?” Angela asked.

“Yes exactly, oh there he is. Necromancy look we have found Daemone, your little kitten.”

Angela was quite started when she saw Necromancy. There was no doubt it was her kitten’s mother, the same black fur, yellow eyes and yes, there was also saliva dripping from the corners of her mouth and it was more panther sized.

“Meow” said Necromancy to the kitten, which sounded more like a stifled growl and she packed the kitten by the neck and disappeared to the house next door.

“Thankyou so much” said the neighbour, “I hope it was no inconvenience.”

“No, not at all, The kitten was a little hungry so I gave it some liver I had.”

“You gave him what?” said the new neighbour in a shocked voice.

“Just some liver, I hope that was OK.”

“Oh yes, no problem, all my cats just love liver, but perhaps it would have been better to give him tuna fish, they have no blood.”

“I have no tuna fish, but it was a very gentle and kind kitten. Look she scratched me, probably because she was afraid, and afterwards licked my scratch better. Why, you can hardly see anything more.”

“Yes, that would be the case” said the neighbour. By the way let me introduce myself, I am Nick Fleder and we will probably see a lot of each other now, but do not feed my cats. They are very thankful for extra food, but it might not be very good.”

“For the cats you mean.”

“Yes, also the cats.” and he flew off. “No” thought Angela “it must be a figment of my imagination, People don’t fly.”, but this one did.