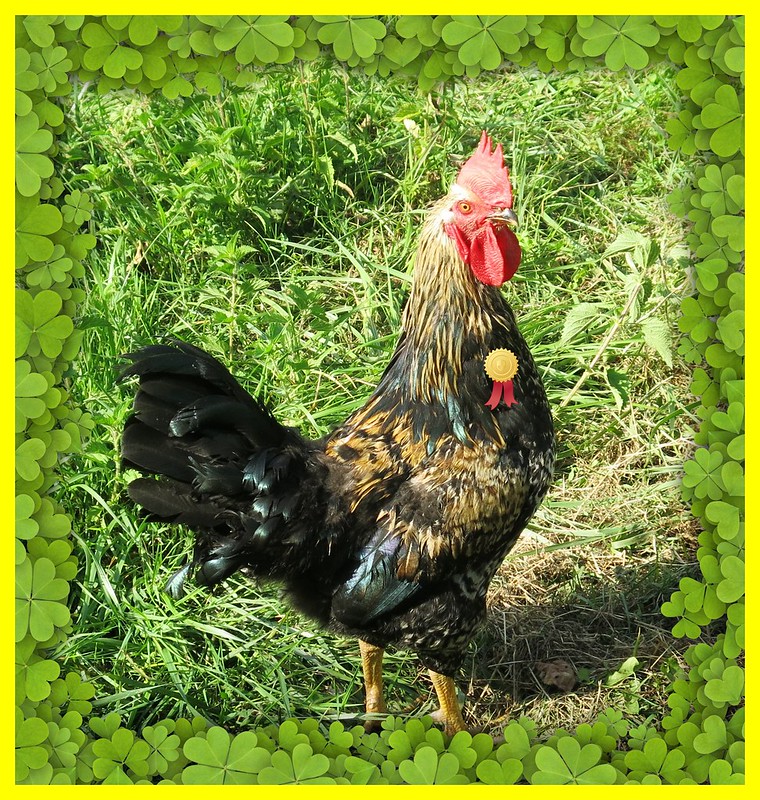 “My prize rooster” said farmer Fritz with tears in his eyes, as he pinned the medal for bravery in the site of the enemy on Harald’s feathers. The hens all clapped their wings in accordance and Harald was surrounded by reporters of the Chanticleer Newspaper for an exclusive interview.

“Yes it was a dark night and I and my seventy-two wives were sleeping, recovering from the daily egg laying session. I made my usual control inspection before laying my feathers to rest to ensure that all of my harem were present in the hen house. I then noticed that Gertrude was absent.”

*She went outside for a scratch” said Hilda.

“But that was some time ago.” I answered. My poultry wives are all equal, no matter how their egg laying amounts fare. It was then I saw a quick motion outside before our residence: something large and dark and above all silent.

I then heard excited language from Gertrude, a stifled croak and nothing more. I called with all my might, using the rooster war cry. I smelt him, the fox was nearby and Gertrude was in danger. I flew the coup, as we would say, and crowed as loud as I could hoping to frighten the fox away, but it was already too late for Gertrude. I applied my nocturnal sight and saw the fox with Gertrude in his mouth. Gertrude was silent, she made no movement, it was too late. I knew only one thing, revenge and protection of the remainder of my harem.

“Hilda inside” I called with as much excited language that I could manage. It was imperative that she recognised the danger of the situation, but the fox had seen her. He dropped the remains of Gertrude, which was now unfortunately just a limp bundle of blood stained feathers. I remember that day Gertrude had achieved the record egg laying  target. She was so proud and of course, so was I, my hens are the best, the most faithful and I was proud to be their rooster. It was more than a family, it was a dynasty and Gertrude was no more. It was then I saw red, green and blue, all colours appeared before my eyes and I fluffed up my feathers. I knew no mercy, it was to be me or the fox.

Unfortunately the fox was not the same opinion and he was now studying whether to attack our brave Hilda (Hilda makes a cluck from Harald’s surrounding harem) or myself. As the rooster I naturally stood up for the honour of my harem and crowed at the fox. No, I did not just crow, I applied the most exciting cockerel language I had learned since hatching from the egg. My ancestors would have been proud of me. The fox stopped in his steps and ignored Hilda. I was now his target, he was out to get me. He hissed, and growled, but I stood my ground and I pulled myself up to my full height. He then jumped. My concubines were now all watching and I was determined not to let them down, it was not only a matter of rooster honour, but survival.

As the fox took my tail feathers in his mouth I jabbed at his eye with my beak. It was a dangerous beak as I sharpened it regularly on the metal surrounding our enclosure and I scored a full strike. Yes the fox had lost an eye. Unfortunately during this combat, I had also lost my pride and joy, my tail feathers, the longest in the area. They were something to see and all my womenfolk swooned for a touch of my tail feathers. I would also mention my fertilised eggs produced the best chickens far and wide.

To continue: Farmer Fritz was now awake and arrived to see what the commotion and excited language was. Farmer Fritz is a good farmer and he realised at once that there was an invasion in the chicken run. He appeared with his sawn-off shotgun and gave the fox the rest as humans would say. I had saved my harem and farmer Fritz had finished off the fox, although the fox was now in a difficult position being blind in one eye.

As you can see readers, my tail feathers are growing again. It was a difficult time for me without my rooster characteristics, but it was compensated by the award of my Rooster medal for bravery in the face of the vulpine foe which I am proud to show on this photo. And now Farmer Fritz will nail this memorable photo to the door of my hen house in  remembrance of my courage.”

“Harald we are all proud to have you as our rooster, we know our feathers are safe in your beak and claws.”

As an epilogue to this newspaper report we would add that Gertrude was a fitting Sunday Dinner for the farmer and the fox? He was given to the local taxidermist and is now is a prize exhibition piece in the local natural history museum. As a reward Harald was given two new members of his harem. He called them Gertrude I and Gertrude II in memory of her demise. And I would just mention the tail feathers are slowly growing again, much to the pleasure of Harald’s chickens.
Posted by Pat Gerber-Relf at 16:19