Tell us about something you’ve done that you would advise a friend never to do. 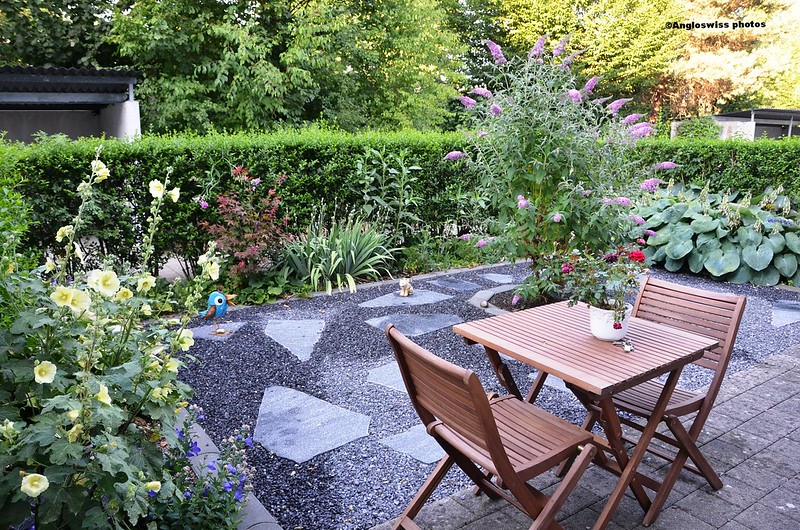 My front garden is surviving this year, even if we have only had two short rain showers in the past 6 weeks and daily temperatures up to 32°C. Thanks to the regular watering session by Mr. Swiss in the evening, it survived. My duty is to look after the back garden.

I do not advise my friends to do anything, they would not listen in any case. If they wanted to advise me to do something I would also not listen, but still do my own thing.  Up to now doing my own thing has got me settled in a different country, marry a native of this other country, put children into the world and blog.

The first three items just sort of happened and the fourth was a questions of “what is a blog”. I still do not really know, but it reminds of the teacher at school when she said write a composition about ……. So I am writing a daily composition. If I do not write this daily composition something seems to be missing in my life. It has become an accompanying theme to my life.

This morning I visited the local supermarket with Mr. Swiss, now that is an exciting theme to begin with and I would not advise a friend to do this, but we all have to hunt for our food. There is another week-end ahead of us and so we planned our purchases carefully. No, that is not true. I think Mr. Swiss wrote a few items on a piece of paper, but I did not look at it. We decided a quick whip around the walkways between the filled shelves would do the trick. That was until Mr. Swiss met a golden oldie colleague that I did not know between the cheese collection and the yogurt. I greeted the mysterious colleague and moved on to collect a few items and left Mr. Swiss to his conversation. I noticed the wife of this colleague had the same thought as myself and also carried on regardless of what her partner was discussing with my partner. We women are so inventive and independent. Who needs a partner to choose a selection of cheese or vegetables.

Five minutes later I returned to the place where I last saw Mr. Swiss. He was no longer there, but had an expression of relief on this face when he arrived from another direction with his arms full of groceries. I now had a cart also piled up with various items. We did a quick comparison of hunting results and continued together, but then we met a couple we knew quite well. One was a musician friend of Mr. Swiss and his partner was a Russian lady, so another opportunity to practice my elementary knowledge of Russian, which was a short moment. She asked me how my son’s wedding went in Germany and so I had ammunition for the next ten minutes of the conversation.

We moved on to capture the remain items for the week-end feeding sessions. I hope I am not boring you with this report of current activities in the household life of Mr. and Mrs. Angloswiss, but shopping is one of the few pleasures we share.

Eventually we were finished and paid our debt at the till. We decided we had wasted enough time and descended the escalator leading to the exit of the shopping center. Just before the exist there is a restaurant, where I saw a lady Mr. Swiss and I knew. I waved and saw she was sitting next to another lady that I had not seen for months, although I see her regularly on Facebook. “Look Mr. Swiss it is ……” I said. “Who??” he answered. I disregarded the last question as I was already on my way to shake hands, give a hug and discover how  things were. We spent many happy minutes catching up on our past life, talking about weddings on my side (of course - she also knows my son) and about her new job. It was then that Mr. Swiss remembered who this lady is and joined us. And so eventually we arrived at the car park, piled the spoils of the hunt into the car and drove off.

The moral of this story might be that when you go shopping, go to another town and another supermarket where no-one knows you. The process is much quicker and you have more time to cook lunch when you arrive home.

See you all tomorrow at the daily prompt headquarters, although really I never advised anyone to do the daily prompt, it can become habit forming.
Posted by Pat Gerber-Relf at 15:50