Open the first photo album you can find — real or virtual, your call — and stop at the first picture of yourself you see there . Tell us the story of that photo.

My Photo albums are all online containing over 12,000 photos. I have a few real photos somewhere, but at the moment I am not in the mood for searching and finding them. It is one of those warmer days where the sun is shining and I have just returned from a long visit in our town of Solothurn trying on shoes for my son’s church wedding.

I found what I was looking for, but my feet are now unhappy after walking all over town, I am unhappy as I am exhausted and feel my age slowly but surely. I discovered during my search that the shoes for my feet have not really yet been designed. It is not a matter of nice looking shoes, but they must be comfortable and not restrict my lumps and bumps which have appeared over the years on my feet. It all has to do with the study of physics and anatomy. Searching for shoes on a warmer day means that things expand, especially feet and eventually you are convinced that your feet were the model for the Yeti in the Himalaya area. I think he is also known as Big Foot in some areas of the States.

Anyhow to keep the WordPress people happy I found a photo of me taken at the beginning of June at my son’s civil wedding in the local registry office. I am the tall one at the front on the right with the silver strains in my hair (the grey haired golden oldie) wearing glasses. My oldest son is behind me on the right and the son that got married is on the left, a little hidden by a friend, and his newly wedded wife is standing next to him on the right. They are now married and will be having their church wedding in two weeks and that is the story. 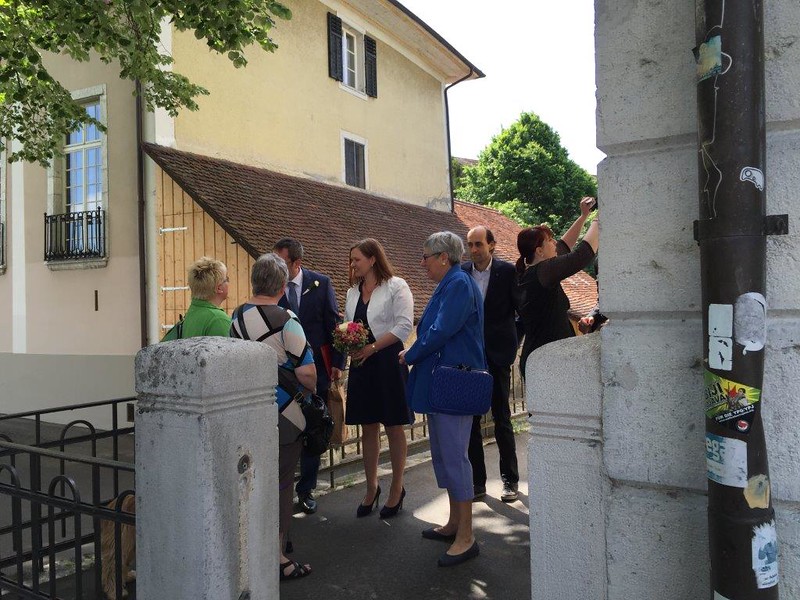 As you can see I again stand out as being the tallest lady at the wedding and tall ladies have big feet, so we return to the beginning of this story.

I decided to go to town with the local train for my shoe quest, just a 5-10 minute journey. Unfortunately there is building work taking place at our local station and no-one told me that everything has been temporarily changed. I climbed over rubble and stones to reach the ticket machine and heard a voice behind me (in Swiss German).

“Where do you think you are going?” it said.

“The machine has been moved lady, you have to walk in the other direction to the sign post.”

“Ok, no problem” was my polite answer, not wanting to get involved in more discussions with this voice of authority. These men were at work, although I am not sure what work they were doing. They seemed to be standing around and waiting for something - perhaps the end of the working day, or the train.

I walked onwards, found the ticket machine and was annoyed to find that not only the ticket machine had moved, but the nice comfortable bench, where I could sit whilst waiting for the train, no longer existed. I suspected that the workers had removed them for their own purpose to sit on whilst eating their sandwiches when they had a break.

This excursion to town was becoming a threat to my psychological condition. I eventually arrived in town and who should I meet waiting for the train at the station, my sister-in-law, who was going home. We had a few minutes for a discussion about feet and shoes, being around the same age and having the same problems, and her train arrived and I walked on through town to the shoe shop, where this whole prompt began.

Funny where these prompt lead sometimes. I hear Mr. Swiss preparing the evening meal and so I will now close this work of literature.