The internet has recently been swept up by the ALS Ice Bucket Challenge. Is there a cause — social, political, cultural, or other — you passionately believe in? Tell us how you got involved — or why you don’t get involved. 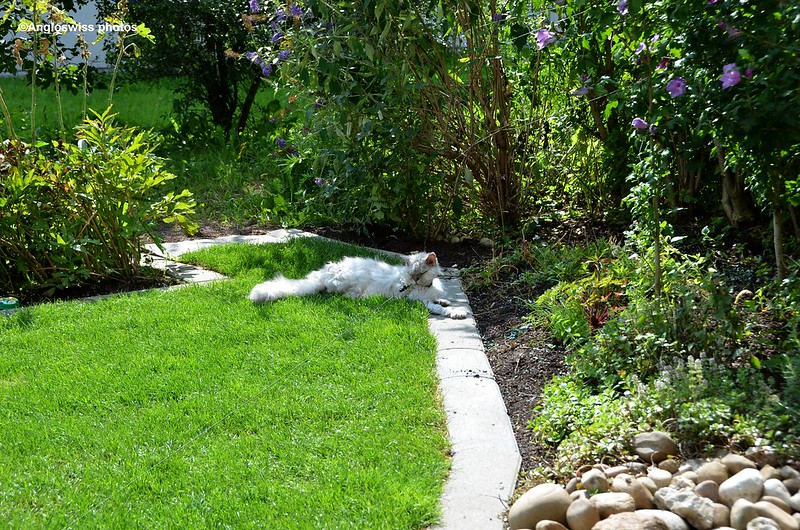 See my cat, Fluffy. He is completely blind since he was two years old. OK, just a cat, but I knew him for the first two years of his life when he was not blind. When he could run and spring and did not have to sniff his way.

My oldest son is autistic. He is now 45 years old. Of course it would be nice if he was not autistic, if he could make friends and go out with the boys and have fun. He has his interests and he lives in his own world. Those that know him know he is autistic and there are some great and understanding people out there. Now and again someone writes something about autism on Facebook and people begin to show some sort of ribbon on their page claiming sympathy with the cause of autism. I do not doubt their feelings, but it is now and again and a week later the same people are sharing sympathy about breast cancer or perhaps diabetes. We all have our problems.

As far as I am concerned, Facebook can keep its psudo ALS Ice Bucket Challenge. I found the film on the link quite sickening and false - something like a cheap show on the TV I saw something on Facebook about this, ignored it as another publicity stunt for the rich and famous and moved on. So I still did not know what ALS actually was, because I just tossed it into the same bucket (without ice) as when I told everyone the colour of my bra I was wearing (if I was wearing one). That was a few years ago, and it was apparently in aid of breast cancer. A very good cause, but somehow it petered out and after learning the colour of the bra my Facebook colleagues were wearing for a week I carried on with my own thing.

I did connect with the ALS link that the WordPress man gave us and what did I find? Another publicity filled gimmick with YouTube similar film and false laughs everywhere when eventually a bucket of ice from nowhere emptied on the head of the expecting victim. I was not impressed. There are many illnesses in the world, tragic and painful and now people have discovered Facebook and found a new space to draw in the masses where we all share and give. Nothing wrong with giving, but I am definitely not swept up with an ice bucket challenge. Wouldn’t it be nice if the rich and famous could give without having to put their heads in a bucket of ice in the name of Facebook: just donate to a charity regularly from their millions. I know some do, but many do not. The whole pseudo world of Facebook charity sickens me as well as the people that suddenly have discovered ALS. I had never heard of this complaint and now I know what it is. To give Facebook credit they have drawn our attention to a dreadful disease, but this attention will not last. It is comparable to a newspaper story, today it is news and tomorrow forgotten. Something else takes its place.

At the moment I am annoyed with Facebook and their new Messenger app. I first discovered this on my iPhone where I was warned  that it was on its way. Being a golden oldie and still using e-mail, SMS or telephone to communicate, I asked why I needed a messenger. Now and again I might use the SMS function. I might receive a message but very rarely. I am actually permanently offline in Facebook and rarely receive a message direct. People seem to think they can start a conversation when they feel like it, and I do not always have the time. It works for me OK being offline. I give my answer when I see that there is a message waiting. Today I received a message on my telephone as my computer was switched off. I wanted to see what it was all about and was promptly informed by Facebook to download their new and wonderful app which even saves 40 seconds per message answer. Wow, I have 40 seconds more time at my disposal. I decided I can live without this new and wonderful Facebook app and if someone really needs me they can call me on my phone.

So now charity has discovered Facebook by adding their gimmicks. Sorry, not interested. My son is still autistic, I still suffer from diabetes and others I know still bear their incurable illnesses without a publicity drive from Facebook. In the meanwhile the world is going to the dogs with wars and disagreements between different countries and beliefs. And I should be swept up by an ALS Bucket Challenge because Facebook has been involved.

Now I will dismount from my soapbox. I am here to have fun with daily prompts and not discussions.