Ah, sweet youth. No matter whether you grew up sporting a fedora, penny loafers, poodle skirts, bell-bottoms, leg-warmers, skinny jeans, Madonna-inspired net shirts and rosaries, goth garb, a spikey mohawk, or even a wave that would put the Bieber to shame, you made a fashion statement, unique to you. Describe your favorite fashions from days of yore or current trends you think are stylin’. 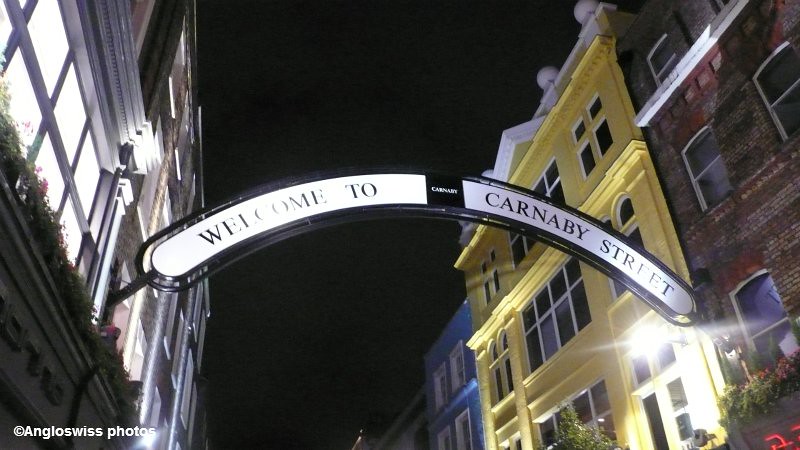 This was about as far as I got hitting the fashions in my teenage years. Taking a walk along Carnaby Street in the London West End, but wait, not really. I took the photo on a visit to London. My teenage days did not have the money to buy the best.

Mum had no idea of fashion and dad found it was a woman’s thing. He had a saying “they like that sort of thing”. Who they were I never really found out (probably women) and what sort of thing it was I had no idea, and probably neither did he. Whilst the other teenagers were wearing the latest stuff, I was left to my own discoveries.

School days as a teenager were clothed in green and red, they were our school colours. In Winter you wore a green skirt, which got very shiny with time as you really only owned one and wore it every day. It was accompanied by a cream blouse which was garnished with a red and green striped tie hung around your neck. This was all covered by a green gabardine coat with a belt and the head was wearing a beret with a school badge. It was school uniform. Of course we girls, or some of us, would adapt the length of the skin according to the latest fashion (mini skirt?), but uniform remained uniform. We were even subjected to an examination in the afternoon when we left the school. Two prefects were watching us as we marched out to ensure that the badge was showing on the beret, and our shoes were conform.

Brown was the school shoe colour, flat without heels. Unfortunately brown shoes were not very fashionable at the time. I once found a lovely pair of shoes, they were cream coloured. As they were cheap (everything had to be a bargain or cheap with mum). She bought them and dyed them brown. Mum bought all my shoes in the local co-op shop. She could pay regularly weekly and buy coupons which she used to buy my shoes, which meant my fashion taste was very much influenced by the co-op and the co-op was not a modern boutique. It was cheap and did not follow the latest developments.

Where was the scope for being fashionable? I had no money of my own until I eventually found a Saturday sales job in the men’s department of a department store. I was earning £1 a week, which was a lot more that what my mum was giving me, but even that did not over my clothing wishes. I wanted to go on one of those school cruise holidays, a Baltic Sea journey. Mum said we couldn’t afford it, so  I paid it myself from the earnings at my job.

When I left school at last I had wages and the opportunity to buy something more fashionable. I had a boyfriend and wanted to impress, but I was never a fashion model, although my figure would have done it had I been discovered. I was tall and skinny just like the english famous model Twiggy, but I did not have an older sister or friends that knew how to do it, so I gave up. Today I am still tall and my dimensions seem to have moved towards the South.

Actually this whole subject makes me a little sad. I missed out on a lot at the time, studying for examinations and keeping it all cheap when I was still at school. The whole subject is depressing and Carnaby Street was just something for the teenies. I think even then I preferred to visit the library and read a good book.
Posted by Pat Gerber-Relf at 15:51