You’re on a long flight, and a palm reader sitting next to you insists she reads your palm. You hesitate, but agree. What does she tell you?

Since 12th August 2013 when I last wrote about this subject - Life Line - I have not been on a plane sitting next to a palm reader and it seems the coincidence that it would happen is almost zero. I fly once a year and sometimes might even go on a train, but my seat neighbours usually want to read their book or play with their mobile phones, although they are generally only preparing the calls they want to make when they land on safe ground.

I remember my last flight home from London to Zürich. There was an Asian guy sitting next to me and he was still sending messages and calling until the plane was suspended over the airport. You just have to love those people endangering everyones life on the plane just to tell some far flung business person that you will be on time for the conference. As we were landing, yes, he had his phone in his hand again and caught up with all the things he was planning on the flight. He was quite casually dressed, decent, jacket, white shirt and matching trousers. As the plane sunk to the fields of Zürich he took out a tie from his jacket pocket and tied it around his neck to make him more business like. I assumed that he had a conference somewhere in a bank in Zürich after landing. Perhaps not, but all the business blokes that arrive in Zürich usually want to check on their bank account. 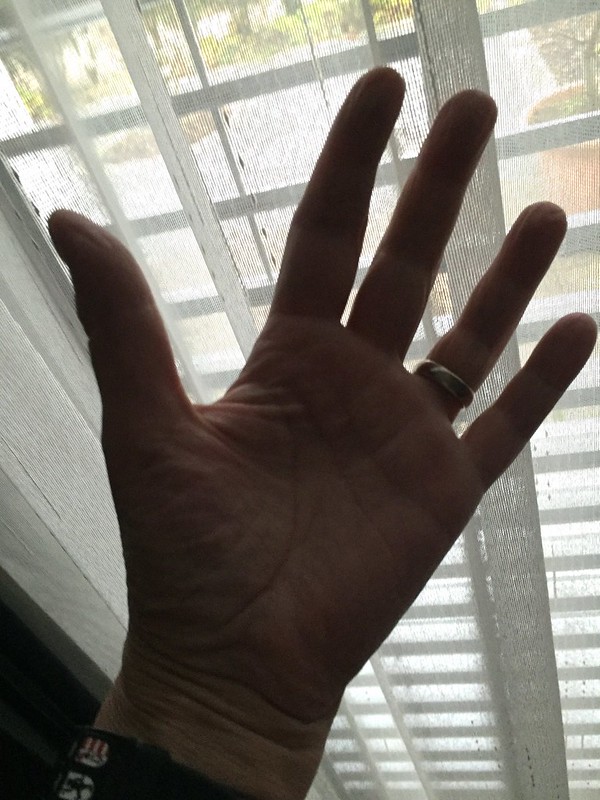 So let us return to the hand, after all the prompt is about hand reading and we do not want to be accused of not attending to the subject of the prompt. I am sure that any hand reader would be overstrained by analysing the facts and figures on my hand. I am only too glad to be able to move my fingers. One of the reasons why I like playing with the keyboard on my computer, it keeps my fingers fit and they never leave my hands.

The palm reader might have problems between my thumb and first finger, especially as this particular first finger happens to have twice the width of the others. This leads to the conclusion that I have a sign of problems, which I do, as this finger happens to be a product of arthritis of the hand. The palm reader would probably now think about giving up, but then she would see the lumps and bumps below the second finger. She would prod and pull and perhaps stroke this part of my hand, but the bump would remain. I would tell her no problem, the doctor told me this can happen and if the bump grows larger and causes pain I can see a specialist, but probably it will just remain as a bump.

“You have many grooves and channels and even furrows in your palm, this would be a sign of a complicated relationship.”

“Yes, definitely” that was really one clever palm reader “I do have contact problems if someone wants to shake my hand. If they have a firm grip, there is a pain that shoots along my thumb and up to my elbow. Is that serious? Although it disappears when they release my hand. I prefer a softer touch when people hold my hand.”

“Huh” It is then that I feel a considerable pain in my hand as I clench it to form a fist. The palm reader leaves, no flees, and puts me on the blacklist of people not to have their palms read.