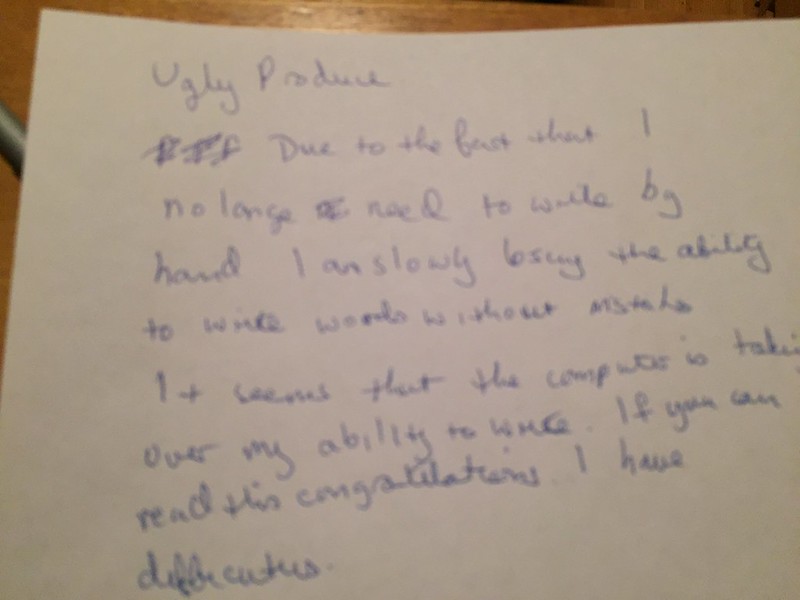 Help! I have problems. I have forgotten how to write by hand. I was never the best in school with my writing. I remember if I had a new exercise book the first page would be perfect, clear shapes and even legible. As the book progressed it got worst, and the last pages were just plain scribble. I even learned stenography and was quite good at it. I can still write it today, although no longer necessary. The advantage was that only you had to read it, because you made notes for yourself: whether in an office or perhaps quickly at home.

This week I had to write a page by hand. It was necessary, in the legal sense of the word. The details are not important, suffice it to be said I had to do it in my own handwriting. I sat down at the desk, pushed the stupid computer to one side, after all who needs a computer when you are going to write it all by yourself. I took a clean sheet of paper and wrote the title, so far so good.

I then began to write the remainder. It was a job of just copying from a typed page, what could be more difficult? Yes, that is what I thought. After completing the first line with about 4-5 words I decided to throw away my sheet of paper and begin again. I had missed out a few letters and the remainder was unreadable. I must say it was in German, but even they just used letters, so nothing out of this world.

I began again and yes, my garbage can was piling up with white pages containing just a few words. Even my wrist began to ache. I took a glance at the time. 20 minutes had passed and I had not got through the first half page. Eventually I did it, I wrote it all. After an inspection by myself and my other half, we discovered that three words had failing letters and others were just not words, but scribble.

I was gradually reaching breaking point, where the written word had a curse placed upon it by various uttered profanities. However, this did not help. I had now disposed of 25 pages containing an average of 5-10 words each and now the pen gave up. It had a nervous breakdown and was writing only a shadow of itself. No clear blue lines, just something transparent, a dent in the paper. I found a second ball point pen, much better quality and after another half hour I completed the task, more or less. I mean no-one is perfect but you could read what I had written.

At last success. My hands were stained with blue ink because the second pen also decided to leak half way through, but luckily my immaculate sheet of white paper had no ink stains. Was it age, or shall I blame it on the online life I now lead? And it was ridiculous to write something by hand, very old fashioned, but it seems there are still tasks in life that require a hand written document.

My ugly produce was handed in the next day where it was required and they did not even bother to read it. Just deposited it where it should be. What an insult, after all the effort I invested in writing a perfect document by hand. Or perhaps over the years I have forgotten how to write?
Posted by Pat Gerber-Relf at 20:06