Textures areTextures are everywhere: The rough edges of a stone wall. The smooth innocence of a baby’s cheek. The sense of touch brings back memories for us. What texture is particularly evocative to you? 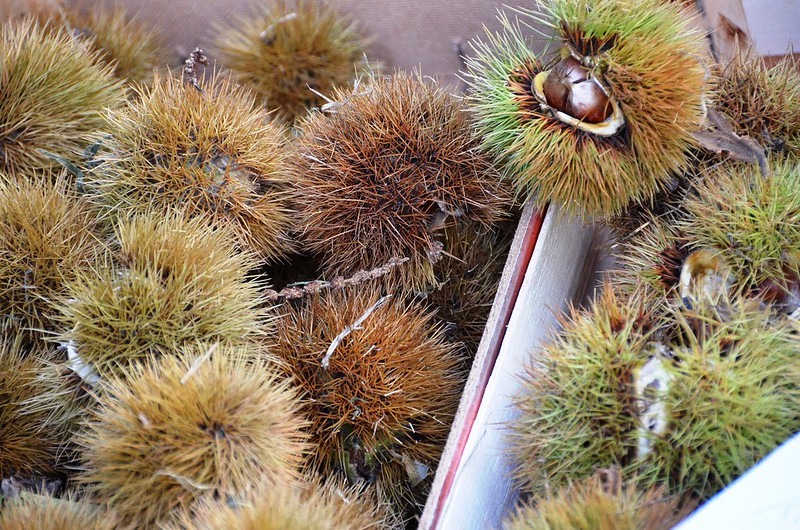 These are horse chestnuts: they are the chestnuts you would roast on an open fire after removing the shells. They are the edible chestnuts and make it difficult to reveal their nutty secret. The chestnuts. I knew as a kid growing not the trees were not so prickly, but had a smooth skin. I only met the roasting chestnuts when I move to Switzerland. They grow mainly in the Italian part of Switzerland, Ticino,  where the climate is mild. My first encounter with them was on a walk somewhere near Locarno. They had fallen from the trees, but not so easy to collect, due to the thorns on the outside casing. I discovered this collection at our local market in Autumn.

However, you are not always welcome to touch some things, no matter how inviting they might be. It was many years ago when my offspring were boys and we paid a visit to London. We were staying with my parents, just a half hour underground train journey from the centre of London, and on the list of things that had to been seen was the Tower of London, a castle on the banks of the river Thames and where there were the old dungeons, beefeaters (the guard of the Tower) and above all yes, the crown jewels. I mean the real jewels, the crowns that the Kings and Queens of England wore on their heads, not just something to look at but to carry.

Of course these crowns were not cheap, they had been assembled with all sorts of diamonds and other expensive materials. I believe the Queen’s best piece contained the Koh-i-noor diamond which had been found somewhere in India and uncut had a value of 793 carats, so it was not something you just put on a pedestal for normal humans to touch. The complete collection was enclosed in glass occupying the central section of the exhibition room. Of course it was all guarded by a couple of those beefeaters and men in uniform. The kids were thrilled as we didn’t have a royal family in Switzerland, just banks and I must say Mr. Swiss and I were also enjoying the visit.

In my quiet, harmless way, I pointed to the crown with the Koh-i-noor diamond at the top to explain things to my children. To do this, my hand glided over the glass protection of the whole crown jewel show.

“Excuse me madam, but would you please refrain from touching the glass protective screens. They are connected with an alarm system, and your touch will trigger off the alarm system which is very noisy. A solid thick wall will descend, all the entrances will be barricaded and no-one can leave for at least 24 hours until everything is secured.”

I suppose these things happen.

“Now stop touching everything” was a Mr. Swiss reaction and two boys were sort of laughing behind their hands. The man in charge of the protective system was not very happy and I noticed he kept his eye on me until we left. Did he really think I was going to steal the crown jewels? So be warned, collecting horse chestnuts is safer, even if they do have a protective prickly shell.