You return home to discover a huge flower bouquet waiting for you, no card attached. Who is it from — and why did they send it to you?

When you reach the golden oldie years you only have secret admirers if they want something from you. A parcel arrives in the post, and it contains anti age cream to flatten your wrinkles. It might be a free sample, but only enough for a smear. When your wrinkles get to the state where you stop counting them, you need a large packet. Reading further on the advertising leaflet, no problem and then it costs money.

“Mr. Swiss if that bouquet from you.?”

And the problem is solved, it was delivered to the wrong house. We do not do bouquets, they re too much trouble. On my last attempt at this prompt I spent most of the words and sentences telling everyone that we have a shortage of vases. In the meanwhile we have solved the problem of putting flowers in water that begin to smell after a day or two, start to wilt and make unsightly slimy rings on the glass. They are more trouble than they are worth. 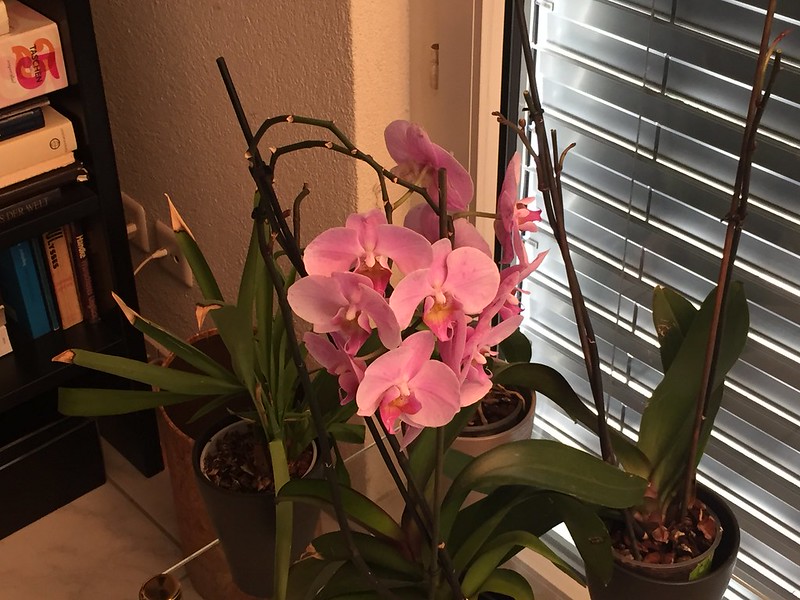 Like everything else in my golden oldie life, I tend to overdo things. When I discovered my first orchid on a special offer at the supermarket I called Mr. Swiss. I always call him for advice when I buy a container with something growing or flowers. You never know. He might dive into his pocket and pull out some sort of plastic card.

“That is a bargain at that price, two for one” and so we brought our first orchids home. We then discovered that they flower for ages, need only water once a week and now and again something called fertiliser. This was ideal. No longer throwing smelly rotting flowers away aftera a few days, orchids did not smell and did not die very quickly. It became a regular thing to buy an orchid when there was a special offer. Unfortunately the special offers seemed to arrive at least twice a month and I soon had a collection of 16 orchids. Of course they give up making flowers eventually, but there again I am a succour for punishment. “They might flower again” was my thought and I kept them. The small glass table was soon overflowing with orchids dead and alive, so I removed the ones that might flower again, but had no flowers, to the floor beneath: after all there was room enough.

One day Mr. Swiss had one of those claustrophobic nightmares, where he felt the living room was being taken over by orchids. I cannot blame him, there were special orchid pots slowly creeping across the floor. After a discussion, we/I decided that the orchids must be reduced. It was a process of elimination: the orchids that were showing wilting leaves ready to drop went first. Thy were followed by the orchids that only had leaves and no flowers. Eventually five survived, although in the meanwhile one of them went to the orchid happy hunting ground, dropping two leaves on the way.

You can now see the remainder in the photo. The orchid that is showing flowers, has been in this condition for at least 3 months. The orchid at the back on the right has two stalks with buds and the other two might do something and are still thinking about it. In the meanwhile I discovered fertiliser in the shape of sticks. Just put two in the earthy surrounds and forget feeding them.

So prompters, if you want to make me happy on my birthday, 6TH DECEMBER just in case you did not know, just put an orchid in front of my door, but sign it with your wordPress name, otherwise I will not know who it would be from. Oh, and as I said in my last effort for this eternal prompt, a WordPress t-shirt would also be OK, size XXL in blue.
Posted by Pat Gerber-Relf at 15:34