Plan the ultimate celebration for the person you’re closest to, and tell us about it. Where is it? Who’s there? What’s served? What happens? 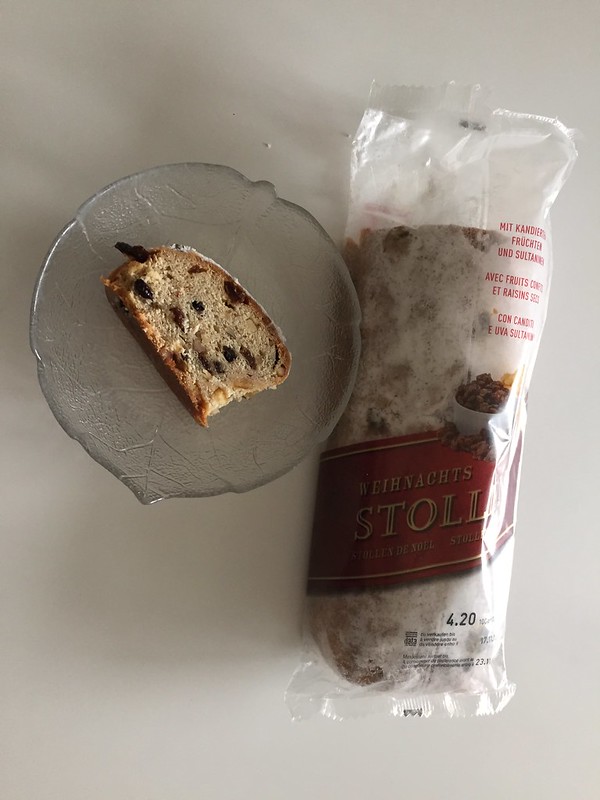 “A piece of Weihnachts Stollen, you know that Christmas cake stuff they sell here. It was a special offer in the supermarket, and I bought it this morning, remember?”

“Christmas,?`It’s already Christmas, but I havn’t organised anything yet. We bought Christmas Stollen this morning?”

As you can see life is now full of questions and answers, due to the fact that golden oldies tend to forget. I reminded Mr. Swiss that we no longer organise. We are two golden oldies and golden oldies let the others organise. If anything is organised we do not have the energy to take part and generally forget most of what and when is organised. It was only this morning that a parcel arrived in the post. It was an intriguing parcel, long, packed in a cardboard box. Mr. Swiss put it on the table.

“What’s that?” I asked, hoping that I had not forgotten an important anniversary of some sort. I quickly had a few panic thoughts. No, it was Mr. Swiss birthday last month. I did not buy him anything, he never buys me anything for my birthday, so what could this parcel be? Mr. Swiss began to worry.

“Did I order something?”

“I don’t know, you are always ordering some life necessities. Perhaps you had to replace something on your shaving appliance, or is it something to do with your music life?”

“It might be. My drum teacher recommended a note book and an accessory for my drum set.”

“Not another cymbal.?” I was worried, we have more cymbals than Charlie Watts of the Rolling Stones, although he is a rock drummer. Mr. Swiss drums jazz, they do not surround themselves with drums, high hats and cymbals, they are more into the essence of the drum kit.”

“No, I did not order a cymbal, I have no room or need for another cymbal, although there is a new development……”

“I had stopped listening as Mr. Swiss was now cutting string and tearing the paper from the parcel.”

This question was posed in my direction, so I looked up.”

“Yes, it is the two new batteries I ordered for our Acer computers.”

In the meanwhile I had ordered a new computer, but it is always good to have a life retaining appliance for a dying computer, as my ailing Acer was approaching its fifth birthday.

“Remember, I gave you the battery from my old Acer computer as yours was dead and I ordered two new batteries.”

It seems that both Mr. Swiss and I have approaching symptoms of old age forgetfulness, as we had both forgotten that the batteries were ordered.

No, we two golden oldies no longer do RSVP. We are glad to be able to survive a normal boring day without excitement in our lives. Ultimate celebrations sound more like a wake to celebrate the departure of someone, and Mr. Swiss and I are not going anywhere at the moment. Our favourite celebrations are the ones where no-one is invited in advance, no dates are organised and cooking is reduced to a minimum. The only exciting thing that might happen is that I possibly read a book or write a prize winning suspicious article on the computer, during which Mr. Swiss will watch one of this favourite criminal programmes on the TV, follow by a political discussion, or perhaps even fall asleep.

Who needs to organise a party, we have both become the life and soul of all our parties and they are not even organised.
Posted by Pat Gerber-Relf at 15:46