You’re going on a cross-country trip. Airplane, train, bus, or car? (Or something else entirely — bike? Hot air balloon?) 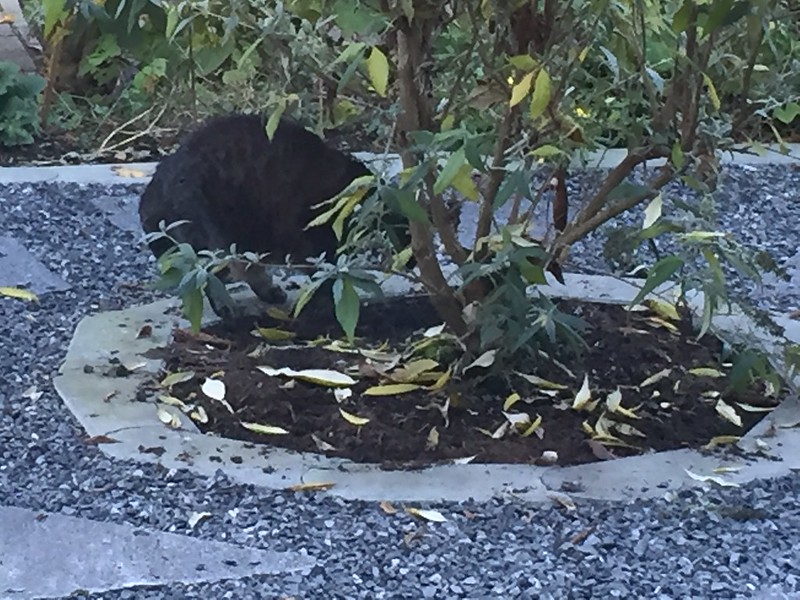 “Tabby what are you doing being my favourite bush in the front garden?”

“What does it look like I am doing Mrs. Human?”

“It looks like you are covering something up with earth.”

“Yes, Mrs. Human, congratulations, that is exactly what I am doing.”

“But what are you covering up?”

“Believe me Mrs. Human,, you do not want to know, but it will not harm your favourite bush. The opposite will happen, that bush will grow and flower and make a fantastic display next year. It is called fertilising.”

“That is what I thought. You have a recycling tray in the apartment.”

“It is not the same Mrs. Human. We felines like to travel and it is boring being stuck inside all the time. We prefer the open air, breathing the scents of the neighbourhood. I have to exercise my paws and whiskers from time to time. Do not forget our relations that live in Africa. They do not use recycling trays, they live in the great outdoors.”

“That is something completely different Tabby. They do not have someone that opens tins of tuna fish or feeds them with wonderful vitamins filled food pellets. Think how lucky you are Tabby.”

“Oh yes, Mrs. Human, especially the vitamin bullets. They are so healthy. But those lions don’t need all that stuff. They kill animals and have a week’s food from it. Butch told me there are cows in a nearby field. We thought we could organise an expedition, Roschti would come as well, like go places and do things.”

“Tabby forget it. You and your feline gangsters are not going on a safari to catch a cow. And now I have just prepared a dish of tuna for you, or did you want to go down to the river and catch your own fish.”

“Err, no I don’t think so. It would be beneath my dignity to catch my own fish.”
Posted by Pat Gerber-Relf at 19:28