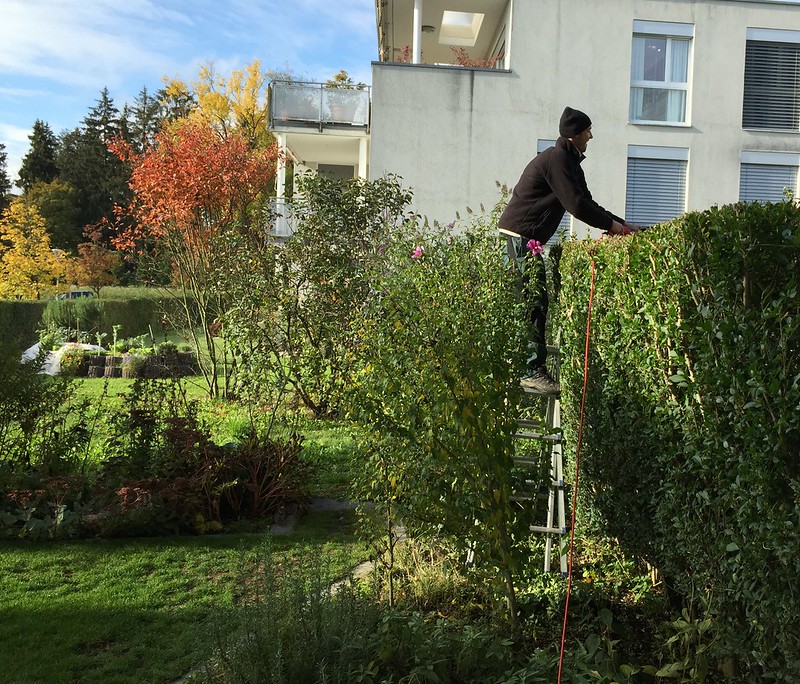 It all began when we had our end year visit from the gardener. Mr. Swiss and I have now reached the golden oldie age where we no longer climb ladders or bend to weed the garden beds when not necessary. I did succeed in planting some bulbs for the Spring show, but my back complained and so did my legs. The gardener, a young man, naturally did all the work in the flick of a hand with help from his apprentice. My lawn had a few bare patches resulting from the tropical drought days we had in Summer and he suggested to sew some grass seeds in a rejuvenation process.

“But the birds might eat them all before they start growing.”

“No problem, I will mix them with the top earth layer and birds do not like digging for their food. I will also scatter some seeds over the surface to make sure.”

I believed this wise statement, although I did remember my birds proudly walking around with worms in their beaks, and I do not remember that the worms squirmed on the surface, but usually lived underground, but the gardener knows it better. He finished his job, sewed his seeds and departed with “see you next Spring” parting words.

The gardener had also scattered lawn fertiliser everywhere and told us to religiously spray the garden at least once a day, if not more, to ensure that the grass did not burn from the fertiliser. It was then you could see Mrs. Angloswiss before breakfast in her dressing gown watering the garden with the hose. Sometimes Mr. Swiss did it, we took turns.

A few days later I saw this in the garden. 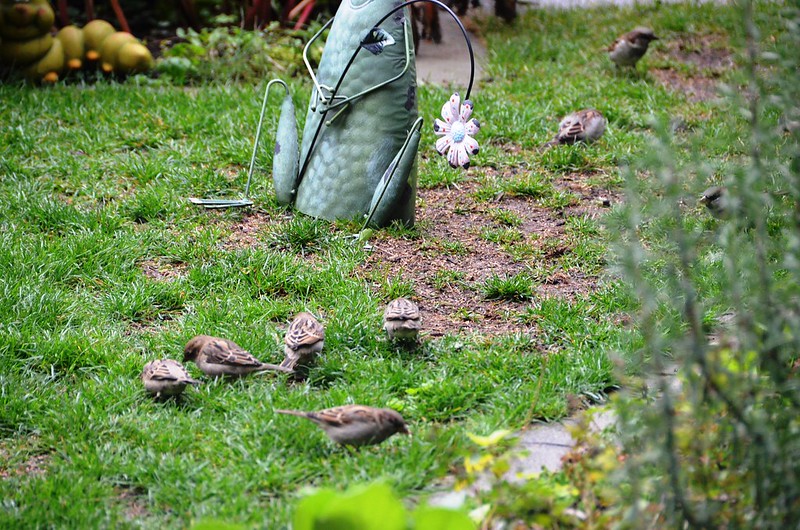 “What do you think you are doing?” I asked the sparrows.

“Don’t ask silly questions” they chirped. “The boss said that there was a banquet at the Angloswiss estate and we should take what we could before it starts growing.”

“But I want my grass seeds to grow, I have some bare patches in the lawn.”

“Not our problem. We have to tank up with food before the cold days arrive. I am sure you don’t want hungry birds in your garden.”

“But I will then put up the bird feeding station.”

“Of course you will, but we cannot wait. By the way tell the gardener they are good seeds, very tasty.”

Something was wrong somewhere. I decided to put my green metal frog on the place where the seeds were sewn to disturb this session of grass seed pecking,  but to no avail. They just pecked around the frog. I could see my lawn rejuvenation disappearing. Then Mr. Swiss had a good idea.

“The lady opposite has covered her plants with a white special cover. That would be a good idea.”

“No problem” I answered “I have two bags full of those garden covers for the cold weather in the garden cupboard.

“Because you didn’t ask.”

Some time later I saw movement in the garden. Mrs. Swiss was collecting large stones and carrying them to the lawn. He had spread out my special plant insulating covers and weighted them down with the stones. 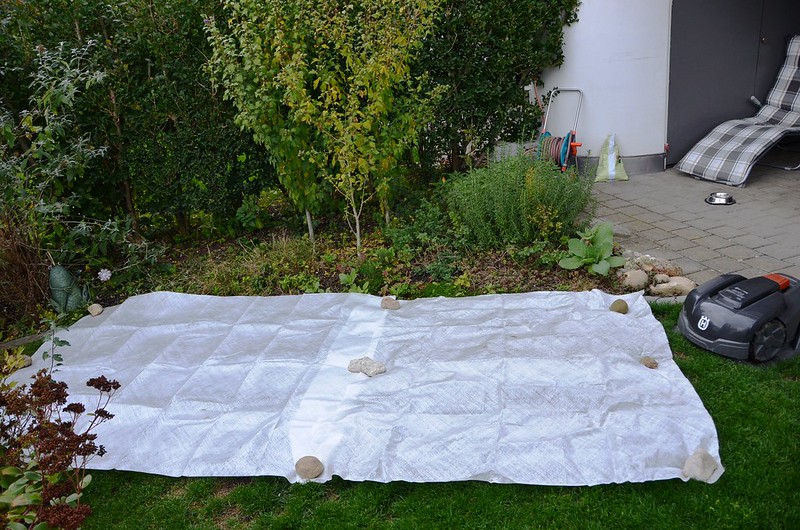 I now have a collection of angry birds looking down from the neighbouring trees, but the bare patches in my lawn are rescued. We will have to remove the cover temporarily tomorrow when mowey, our automatic lawn mower, goes on his journey to cut the grass, but afterwards it will be replaced again.
Posted by Pat Gerber-Relf at 19:12