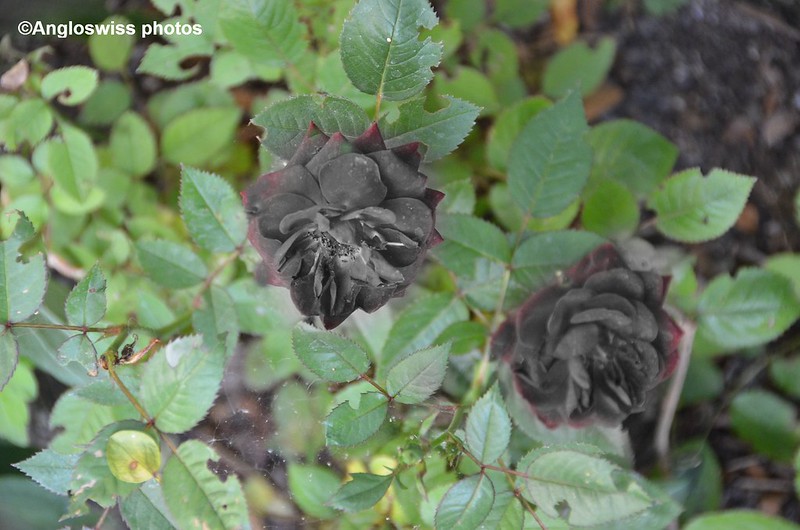 All she had to do was answer a few questions, about roses of course. Myrtle was a hobby gardener and just loved roses. She had all sorts: pink, yellow, orange and of course red, but so did the neighbours. She then saw an advertisement in the “Gardeners Weekly”.

“Are you a rose expert? Name the various rose sorts shown below in the photos and if you are lucky you will win our exclusive new rose “Black Death”. “

Or course Myrtle wanted to own a Black Death rose. Ok, it was not a pretty rose, but it would be something no-one else had and so she spent the evening ploughing through her collection of Rose books and filled out the competition slip answering the questions.

“That was easy” she thought “nothing difficult there, and most of them I knew without looking in my book”. The next day she sent her competition entry off to Dark Rose Developments, Cemetery Lane, Vulcania Town, Carpathia. She noticed that the address was in another country, but the post office had no problems. A week later a parcel arrived from Carpathia with an accompanying letter and certificate.

“Congratulations, you are now the proud possessor of our newest rose “Black Death”. We have also enclosed a bottle of our special fertiliser and would advise only to use this to ensure that the rose remains unique, as well as our certificate of Authenticity which can be displayed next to this unique rose.”

This was beyond Myrtle’s dreams of success. She had visions of people stopping  by her garden and admiring her unique rose. She would definitely win a prize at the next horticultural show in town. She unfolded the certificate and read “We confirm that this is a first edition of a new and individual rose sort, created in the Dark Rose Development Institute in Carpathia and that Myrtle Ramsbottom has been registered as a unique owner of such a rose.”. It was printed in large red letters on black background and looked very important. Myrtle fixed it to the stem of the rose bush when she planted it in the garden.

“Ouch” she said as it seemed one of the thorns on the rose had decided to prick her finger. She even had to put a plaster on her finger to stop the bleeding. She then examined the black flask containing the fertiliser, also with red letters stating “Black Death Rose Fertiliser, to be applied daily”.

Myrtle poured a little of the fertiliser, a red liquid, into her watering can and diluted it with some water as was instructed in the leaflet accompanying the fertiliser. She found the liquid had a very penetrant smell with a sort of iron aroma,  but decided that Black Death roses were something special and needed a special fertiliser.

The next morning she went to the garden to see how her rose was developing and surprise, two more buds had opened showing the glossy black petals. She was a little sad however. It seems that a bird had flown to close to the rose bush and had injured itself on the thorns. The bird was now dead and so Myrtle removed it. She did not want the neighbours to see. That week she daily removed dead birds and mice from the surroundings of the bush. She was a little worried about the neighbour’s cat, knowing that curiosity killed the cat. Actually the bush did not kill the cat, but it seemed that Tiddles was not longer the cuddly little black fur ball he was, but his teeth grew longer and he even tried to kill the dog. Luckily the dog escaped, being a greyhound.

And so the rose bush grew and grew and grew and there was silence in Myrtle’s garden. No longer were there chirping birds and the only animal that visited the garden was Tiddles, who became a good friend to Myrtle, her only friend. And the injury on her finger from the thorn’ It eventually healed although Myrtle found herself having to remove a few drops of blood now and again.  Eventually people began to talk about Myrtle. She was very rarely seen during day, only in the evening when she often took a walk through the surroundIing forest accompanied by Tiddles the black cat who no longer meowed but howled. People began to avoid her, especially on full moon nights. Yes that was a prickly exam she took, but she won the Black Death rose and had something in the garden that no-one else had.
Posted by Pat Gerber-Relf at 15:49