In exactly 100 words creatively describe one moment when your mouth dropped open, chin hit the ground, and tears rolled down your face (figuratively or not). If you prefer to develop this into a longer post, that’s fine too! 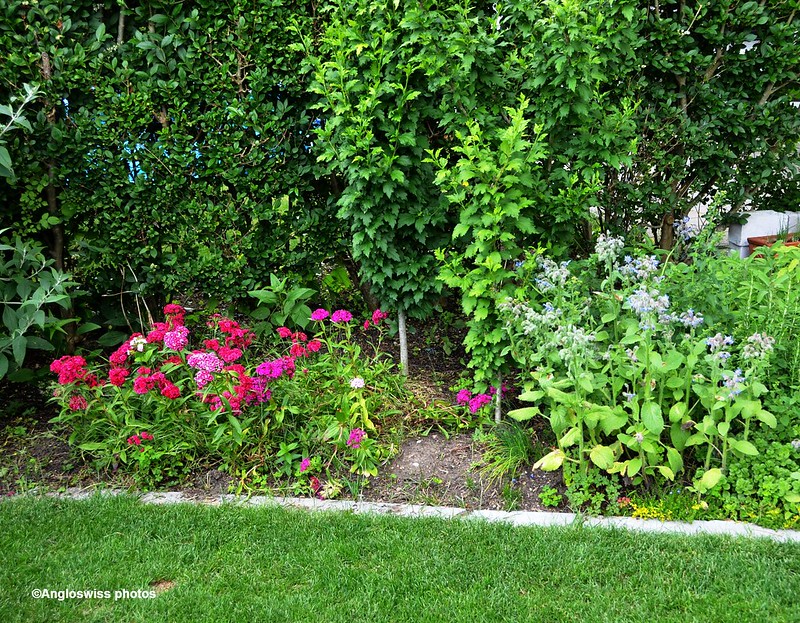 It all depends on how creatively the description develops, but I will do my best to keep it correct. I was in the garden a few months ago when the Sweet William were flowering and the hibiscus was still thinking about it. Oh horror, what did I see. Various varieties of weeds that were slowly infringing on my flower beds. My mouth did not drop open, and my chin did not hit the ground. However, in my endeavours to remove the weeds I hit the ground. For a young average person, this is nothing astonishing, but for a golden oldie it can develop into a major catastrophe and here a few negative descriptions were uttered, both in Swiss German and English.

Luckily my fall left the Sweet William safe, I managed to arrive somewhere on the earth in between - see photo in the middle. Luckily I had removed the stinging nettles a week before, so my only injuries originated from a hard hit on the ground. Generally you stand up afterwards, do a body check to see if all the main parts are still in working order and continue with the work. In this case there was a problem, a big problem. I am no longer able to rise after a fall. Somehow my legs refuse to return to a horizontal position. What do you do? You call for help.

He came running, and no he did not laugh but made attempts to pull me up. Due to my weight gain over the past year, this was no longer as easy as it used to be. I would add at this stage that tears were running profusely down my face figuratively speaking. However, I had a brainwave, yes I still have a brain somewhere. Do not forget, the dinosaur even had two brains. At this point I was wishing I was a dinosaur as the dinosaur’s second brain was in the rear end I believe (bloggers do not hesitate to correct me if this is a wrong assumption) and the second brain would have been of great assistance at this moment.

I called for a chair or something I could lean on. In the meanwhile I made a quick glance around the garden to see how many neighbours were now watching from their various balconies, but there were none. They were probably hiding behind the curtains.

With the aid of the chair, and the arms of a strong man, I managed to sit on the chair. Now the distance of a normal walk compared to a crawl was not far and I returned to my home. The problems of a golden oldie are many, and this was a major one. Luckily I had removed all the weeds from the garden bed, so my work was completed. Sorry it was more than 100 words, but such an event needs more adjectives and verbs.
Posted by Pat Gerber-Relf at 16:44