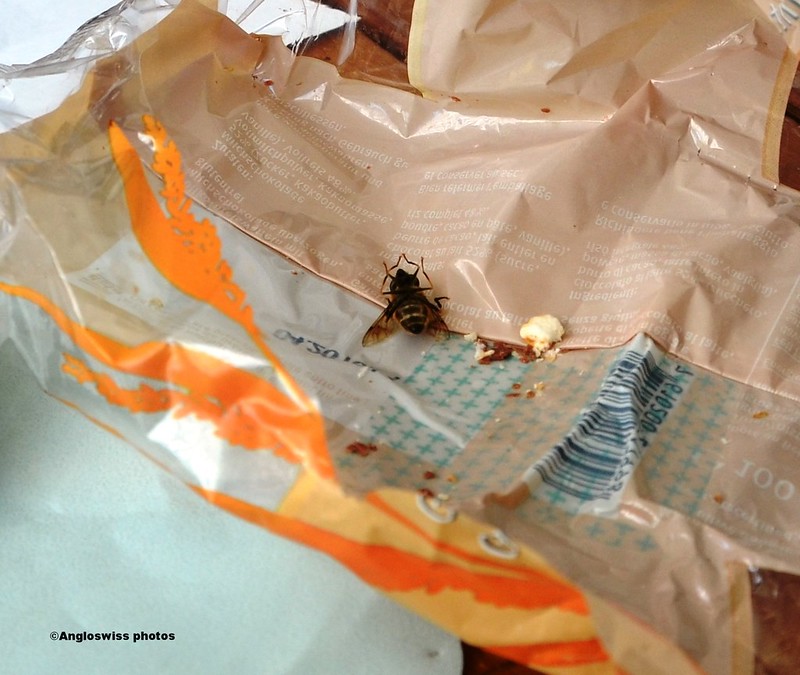 Where there is a camera, there is a way. Stormy permission was perhaps granted in the insect world, but a bee arrived in front of me on the table in the packing material of my organic rice waffle. There were only two crumbs remaining from the waffle, the remainder of my aprés golden oldie sleep snack. Suddenly there was a rustle and a plonk, or something like that and there was a bee laying on its back. I noticed it was still, not moving, probably dead. This was the result of a kamikaze flight into the unknown, spurred on by a whiff of organic rice.

The bee asked no permission from whatever stormy guidance lines exist for the flight of a bumble bee. It took its course, aiming for a positive result, but ignoring the dangers on the way. The flight was abruptly ended by a crash landing. Perhaps there was an ulterior motive behind the result. The bee had been thrown out of the nest from the queen, told to gather the remains of a rice waffle to feed the tribe, or die in the attempt.

Who knows what steers the life of a bee, and who knows what ridiculous combinations of words can appear on a topic generator. It is fate, as is the demise of a bee. I must say it was a glorious termination of a bee’s life. Laying on its back, with legs in the air, still and surrounded by a crumb of organic rice, embedded in colourful transparent cellophane. It was a never to be forgotten death, a symbol and warning to all bees. Do not believe all the stormy permissions your tribe might give you for a crash landing. Crash landings have to be practiced, and perhaps planned on softer material. Had the bee arrived in my breakfast cereal he would have survived, although it would depend if he could swim or not.  A paper handkerchief would have been even better. Survival would have been certain and perhaps I might even have helped the bee to regain stability in the garden, where he could have flown on, returning to the fold.

I took time to ponder over this fateful arrival. Was there a possibility that I could bring the bee back to life, apply bee CPR. Unfortunately it would have bee a dangerous undertaking and any type of stormy permission would not have resuscitated the bee.

So all I can say to the bee is RIP Bee in the Bee Happy Hunting Grounds and hope that a message was sent to the tribe before the crash landing.

“Buzzzzz, look at me ………..” and then there was silence. Let this be a warning to all bees planning to attack my organic rice waffle after lunch. It is a dangerous undertaking and survival is rare, if at all possible. All I can say to the bee, based on words I found on the computer “Everything ends one day, but differently for everyone”. This bee is now preserved on my computer, on three extermal hard disks and on an online photo programme - stormy permission? What could be better.?
Posted by Pat Gerber-Relf at 15:37