Mrs. Angloswiss and the Beanstalk

You know something like Jack and the Beanstalk, the fairy tale, only this was for real.

I have a major sized flower box in my garden for my tulips which arrive every year in Spring. When Spring has gone the box is empty, so I plant something to fill it until Autumn. I fixed a trellis behind the box for anything I might plant that climbs. Last year the climbing flowers climbed too much and became overweight, crashing onto the earth, so I decided this year I would plant decorative gourds, which should be stronger.

In Spring I bought my seeds and planted the whole packet in case something did not survive. Actually only one plant survived the remainder being eaten by the snails. I remember it well. It had been raining quite a lot and the snail army arrived.

“Come on boys and girls (they are hermaphrodite) the food has arrived” I can imagine the chief snail saying to his hungry team. And they devoured every sprouting seed they found. Luckily one seed was a little later in arriving and she survived, as it was no longer raining and the snails retired to the underworld to slowly digest their conquests.

When I left for my 5 day memorable journey to Germany last week this one survivor was battling its way up the trellis, clinging with its feelers, surrounded by bare patches of earth where his brothers and sisters should have been. He was probably feeling very lonely and sad. However during my absence we had our fourth week of rainless days and temperatures of 30-35° C which seem to be an ideal climate for gourd stalks. Mr. Swiss faithfully gave my garden its daily water supply whilst I was absent. When I returned my gourd had grown. 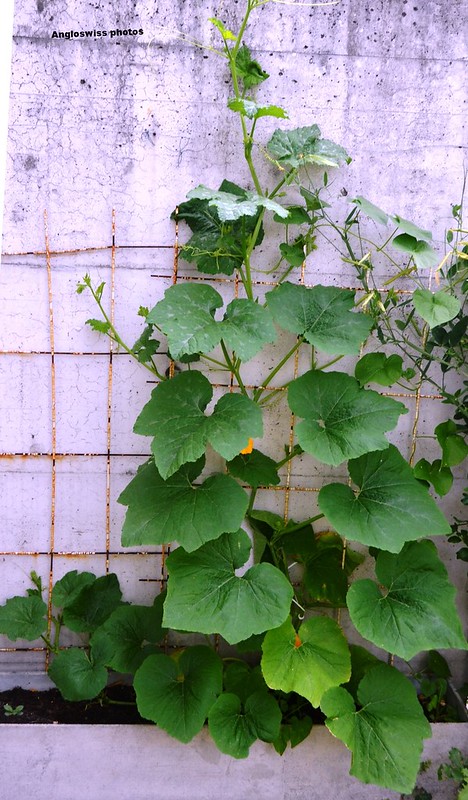 It had developed king-sized leaves and was reaching for the sky. In the meanwhile the dehydrating snails were looking on with jealous eyes thinking “that was the one that got away”. This photo does not do it credit. One leaf was 3xhandsize and what did I see today? Two flowers had opened this morning. I quickly grabbed my super Nikon DSLR camera for an action photo before they disappeared. This morning we had our first thunderstorm since a month, complete with flash-bangs and all the works. Luckily the raindrops kept themselves to a normal size and nothing was destroyed, otherwise I would naturally have protected my giant gourd plant with an umbrella. 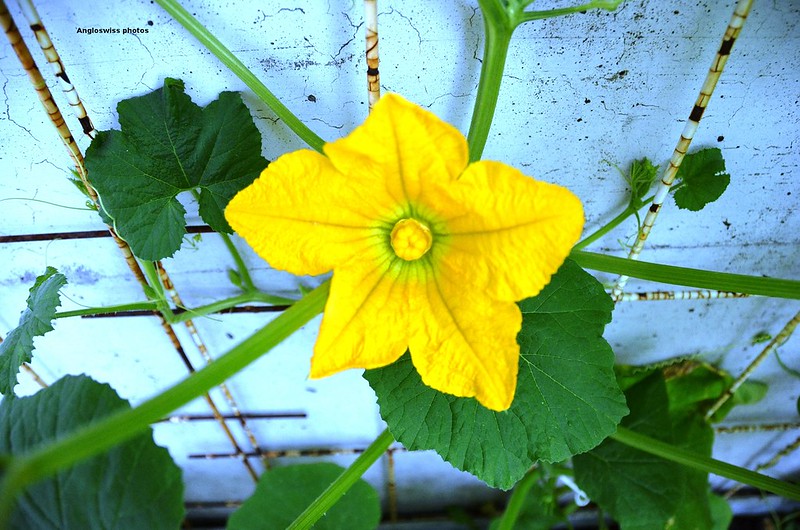 Here is flower No. 1 and honestly I did not feed this plant with fresh blood from one of my vampire victims or any other fertilising substance. I did not carry a bag of horse manure home from the stables, it just grew like this. I think I saw a dark figure one evening standing over the plant muttering incantations and wearing a t-shirt with the letters emblazoned on the front “Miracle Gourd Man”, or was that a dream?

The flower only lived until this afternoon and wilted, so I took a closer look and yes, beneath the flower a large round bulbous green growth is appearing, my first gourd. Reflecting on the development of this one seed, perhaps it was positive that it was the only survivor otherwise I would have been swamped in gourds.

One positive result is that the snails have disappeared. I think they are now planing a new method of attack for next year. 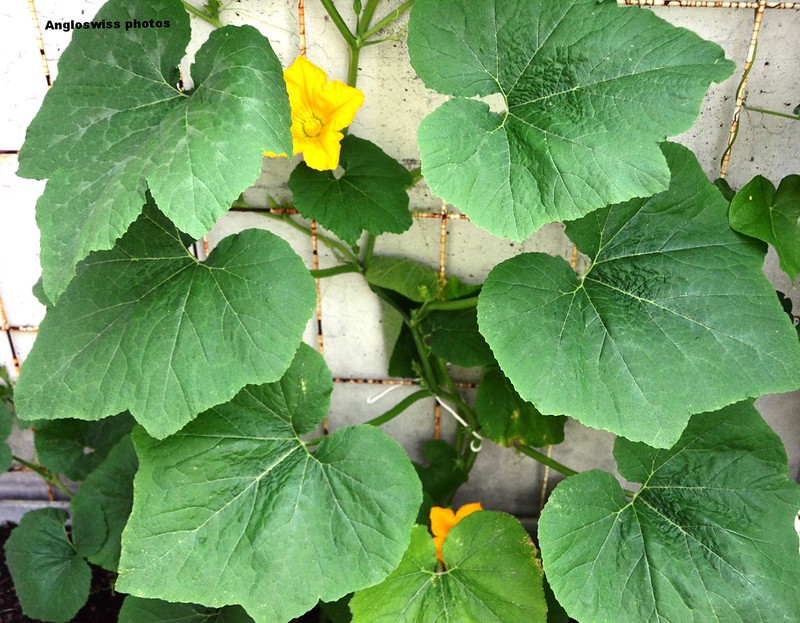