You make a new friend. Make them a mix tape (or playlist, for the younger folks) that tells them who you are through song.

Yes, well I think the most of us know my opinion on plastering my blog with YouTube videos. I know, we all have our favourites, but my favourites are probably not yours and yours no mine, so let’s leave it for now. It is the lazy way out of a daily prompt and for me boring. I have other boring themes as I too am not feeling any prompting though at the moment.

What about mix tape photos of my garden, but not too many because that too can get boring watching how the daisies grow. 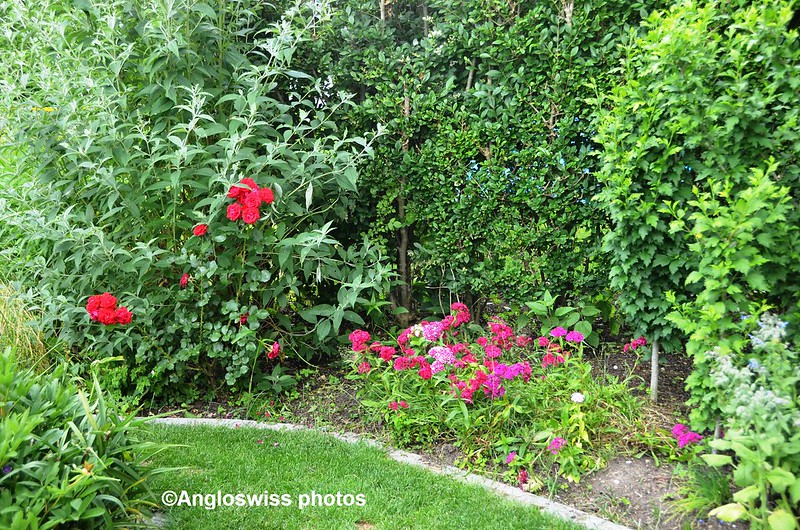 So here we have my rose on the left and some Sweet William in the middle, on the right borage. The rose was originally in my front garden, but was unhappy. It slowly disappeared into the hedge and was attacked by some mysterious insect that was drilling holes in the leaves and leaving the rose buds looking like survivors of some secret war of nature. I dug it up carefully and placed it in the back garden where it now is. The first summer was a difficult summer as I discovered what was slowly but surely trying to kill my rose. I would inspect the problem daily and discovered small green wormlike insects on the leaves and on the buds.

Wikipedia to the rescue and it seems that my roses were under siege from Sawfliy children, which have quite a voracious appetite for roses. They are actually a relation of the wasp, although I did not give them a chance to develop into anything looking like a wasp. Yes, there future development was sealed by my fingers as I carefully picked them out of my rose bush and threw them into the nearby field, thus reducing the sawfly population daily. I was on a permanent anti sawfly watch and believe me the little brutes were sly. They had posted sentries below the leaves watching my every movement, but I won the battle and after a week there was not one tiny newly hatched small green caterpillar to be seen. My rose leaves no longer had holes and the roses developed. This is now history and word has spread amongst the sawfly population, do not mess with Mrs. Angloswiss roses, it will be the death of you.

Now moving to the right of this prize suspicious rose bush we meet the Sweet William. These have a special place in my green fingers especially as they exist due to careful planning by myself. It was approximately 8 years ago that I bought a packet of seeds and planted them in seed trays, each seed in one compartment. This was not an easy job as to the Sweet William experts amongst us, we will know that these seeds are small, almost microscopic. Undaunted my Sweet William seeds showed there first leaves after a few weeks. I waited until they became strong and survival competent and found them a place in the garden. Once they were embedded in the soil, they spread their roots and now appear regularly every year. Now and again I buy another packet of these seeds and throw them into the ground to ensure their presence. I love plants that appear every year, because they do their own thing and I am spared the work.

On the right of my Sweet William my borage plants can be seen. These are easy peasy. Just throw a packet of seeds in the garden and they grow. They seed up when their characteristic blue flowers are finished and if you have green/blue fingers like I have you might even get a second harvest in one year. The borage you see here are the result of last year. It seems the leaves of this plant are edible with a cucumber like taste, although I have never prepared them myself. Anyhow they give a nice blue tinge to the garden.

So now we are at the end of part one of my garden tour for today. Now that is more interesting than listening to a selection of Paolo Conte songs, (who?) or a Rolling Stones Mixture golden oldie selection I am sure. Of course listening to my Tom Waites songs would also be enjoying. He is the guy that has the smokey voice due to a chain smoking cigarette consummation. I am also a fan of Arlo Guthrie, so look what you all missed because we visited the flowers in my garden. My flowers also sing now and again like “Cool clear water” or OK, her is one of my favourite flower songs just to make you all happy.

Nothing but Flowers by David Byrne and the Talking Heads. I love the irony of the words and have my No. 2 son to thank for bringing my attention to this song.