Tell us about a teacher who had a real impact on your life, either for the better or the worse. How is your life different today because of him or her? 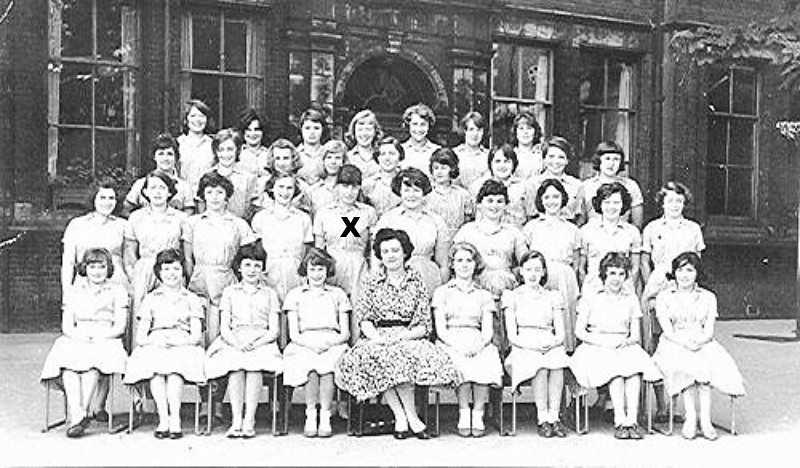 I had no teachers that made a real impact on my life, but I hope I made a real impact on their lives. My life took its course, all my own work, and no-one pushed me or advised me and if they had advised me I would have done it my way in any case. So having established that I am not the type that lives in eternal thankfulness for the words of a teacher,

As I am now a golden oldie and my teachers at school were at least 20 years older than me, most would be averaging the age of 80 or something like that. My last school was a so-called grammar school existing in Spitalfields market, bordering on the City of London. I think the idea was to educate us girls to become young ladies following some sort of good profession. Approximately one third of the school was of jewish faith so they had their own assembly in the morning with jewish prayers and also their own school dinners following their customs. I remember their knives and forks were embedded with the letter “K” for kosher. The rest, like me, did it in our style which was OK.

In any case there were no problems. The only problem was when we realised those of the jewish faith had more holidays than us, due to passover and a few other celebrations. The only thing extra we had was Ascension Day and that was definitely not a holiday, but if you wanted to, you could take the morning off to go to the school church service. Yes, we even had a school church, St. Botolphs in Bishopsgate and I remember the annual Christmas Carol service and the Annual Fanmakers Guild celebration. Ok, who are they? I did not know either, but something to do with the school foundation. They probably donated some money now and again.

It was a sort of private school, but supported by the state, so we did not have to pay for the education, although we had to buy our own uniforms The school colours were basically green and red. The photo was taken mid Summer, so we are wearing the summer uniform: a dress of red or green gingham. The “X” in the photo shows me. They always seemed to put me in the middle, beginning with the tallest in the class and arranging the others around me. The teacher on the photo was Miss Ransom who taught mainly French and I think a little bit of German. She was our class teacher at the time and I remember she left the school to spend a time in Russia learning Russian. I don’t know what happened to her, but she did not reach the headlines in our newspaper for winning the Lenin medal and also was not put in the Lubyanka prison in Moscow for espionage.

Now to the bare facts about our teachers. You must remember it was the swinging sixties when the Beatles made a few records, the Rolling stones started rolling and our main problems as teenagers were whether the skirt was short enough and tight enough and how to board the London bus by making a clever hop onto the raised platform. Saturdays were probably spent in Carnaby Street viewing the latest fashions and the evenings at the Mecca Dance Halls where if you were lucky you might pick up something worth going out with.

However, during the week education was the idea. Our teachers were OK. I remember Miss H. especially, the history teacher.

“Good morning girls, today we will be dealing with the Manor.” This was a farming system in the 13th century in England. Whilst the other two parallel classes were reading about the beginning of the first World War, we were left with economic history. Apparently they only had enough money to equip two classes with political history books, so we were left with the economic history of England.

Miss H. then began the lesson.

There was a scuffling noise as we all turned the pages and then came the mighty words of intelligence.

Did we learn anything - not really, I remember I learnt the text book from memory when taking the final exam and even passed with a good note. If our lesson had been current affairs with Miss H we would have all joined the communist party and probably the KGB. Miss H. was a communist and she did not hide it. I remember it was the year when Fidel Castro decided to allow the Russians to build rocket bases on his nice tropical island. J.F. Kennedy was not impressed and told him to forget it or there will be trouble.

Miss H entered the class There was no time for making notes. She let out a tirade against the foolishness of JF Kennedy and he was a warmonger and should leave the nice Cubans to their ideas etc. etc. Actually I think someone opened the converstion in our class and asked what she thought about it, as we knew it would make a change from a boring “Made Notes girls” lesson.

Once a year my old school has a meeting of old girls and teachers if there are still some around. I cannot go, but am in touch through Facebook where we have a site. Our cookery teacher is still amongst us, now probably around 90 years of age. She is shown in the annual get together photo in the middle surrounded by golden oldies like myself. As a teacher she was not my favourite, but she is a memory of how I was not happy in the cookery class.

If we have this prompt again, which will probably be in a year or two, I can tell you about the others.

Click here for more
Posted by Pat Gerber-Relf at 16:23