Write a post about any topic you wish, but make sure it ends with “And all was right in the world.”

We were warned. We knew it was going to happen, but we saw no danger for us. Life could carry on as always until ….. last week, on Tuesday evening the truth became reality. Mr. Swiss was comfortable watching the news on the television. It was a particularly important news, as the results of the Swiss government no longer supporting the € currency in Europe were becoming known. Good for a trip over the border, everything was cheaper for the Swiss. Bad for small businesses in Switzerland as no-one would be interested in buying expensive Swiss goods, no matter how super and exquisite our products are, money speaks all languages. I was comfortable in a chair reading a book, or was I in a suspenseful moment of playing Candy Twist on my iPad. Peace reigned in the world of Mr. Swiss and Mrs. Angloswiss until No. 1 son appeared in the living room. He is usually engrossed in his own television in his room watching whatever he watches.

”My television is not working, there is a message on the screen that no signals can be received.”

My first thought was “oh” and Mr. Swiss decided No. 1 son must wait, due to events in the Swiss financial situation. However son No. 1 was concerned. He no longer understood his TV world. I would mention he is autistic and if things do not fit with his world picture then something is wrong.

Mr. Swiss decided that the Swiss political situation could wait, and so he switched the TV set to “record” to ensure that he would miss nothing whilst dealing with No. 1 son’s TV problem. I decided to keep out of the situation as I no longer understand the televisions of today. Mr. Swiss had a look at son No. 1 TV and discovered the problem immediately. His set was bought a few years go and it was analogue (huh?). Today sets are digital and so first aid had to be offered to this TV. A card could be inserted in the television and then it might work. After uttering a few profanities, not finding where we put the spare cards. Mr. Swiss found a card and did the necessary but nothing happend.

It was then it occurred to Mr. Swiss that there was a d-day in Switzerland for the death of analogue televisions. I heard something about this, but as we have had a new, super digital TV for the past couple of years, I decided it was none of my business. My son was without a television for a complete evening until tomorrow when the Swiss family mum and dad would buy a new TV in the local supermarket.  In the meanwhile Mr. Swiss gave No. 1 son his big iPad which had a television app, so that solved the TV problem for the evening.

Armed with the bank card from No. 1 son, we arrived at the local supermarket and visited the electronic department. We noticed a few other customers were also buying televisions. No. 1 son only needs a smaller television and not a super hang it on the wall and receive a few thousand television programmes. He is happy when he has a few commercial stations so that he can watch perhaps a music concert, some James Bond films, and even Bruce Willis. A salesman was suddenly without a customer and asked

“We need a new television, but a smaller one.”

“Ah yes, no problem, but we do not stock the smaller televisions. You can buy them online.”

Mr. Swiss knowing that No. 1 son needed a television within five minutes and not five days, we said thank you and Mr. Swiss decided he would go to another shop on the outskirts of our town in the afternoon where they had a sort of mall selling everything - see picture. 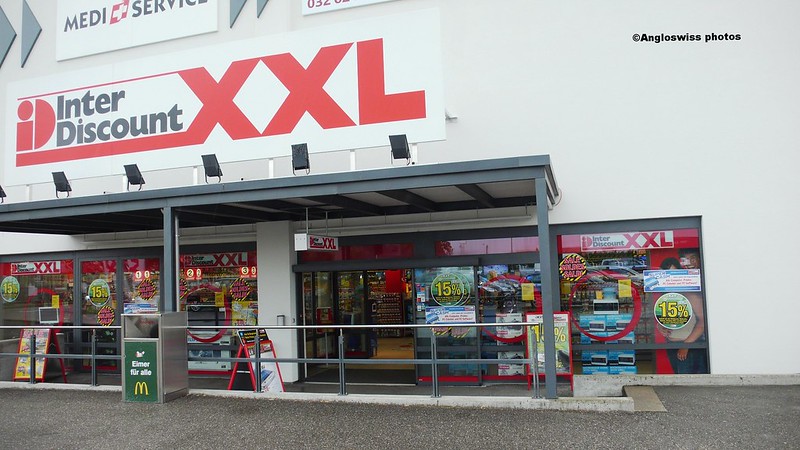 As I have “me time” in the afternoon, writing bloggy stuff ,Mr. Swiss ventured out to the paradise of electronic shops on his own, knowing that they would definitely have something available. After almost two hours he returned. In the meanwhile I was pondering whether to alarm the local police seeing newspaper headlines “Swiss citizen missing, the television mafia strike again”. However he returned with a small box. The mission was a success.

Yes Monday was d-day in Switzerland for analogue televisions and the electronic paradise was full of disappointed Swiss citizens whose television was not longer working. Mr. Swiss said there were so many disappointed television addicts he had to queue and wait for at least thirty minutes, only to find that there were no more smaller televisions available. Disappointed Swiss television addicts were buying televisions like their daily bread. It was a scene of fighting for the last television set, no matter who got killed in the process. Undaunted he left the sales paradise of lost televisions and visited the local town where we have a large department store. Cutting a longer story short, after a discussion with the salesman, the salesman remembered a lonely forgotten new smaller television sitting in the stock room. It was perfect, a good price and the forgotten television now had a new home. After making the long journey from South Korea it had now found its place in a Swiss home.

No. 1 son was happy, Mr. Swiss was happy and I could continue writing my blog undisturbed. A small problem occurred when giving the new television, the breath of life, until someone realised that he had inserted the aerial plug in the wrong place. After a small excitement, more profanities, it was alive and working and all was right in the (television) world.