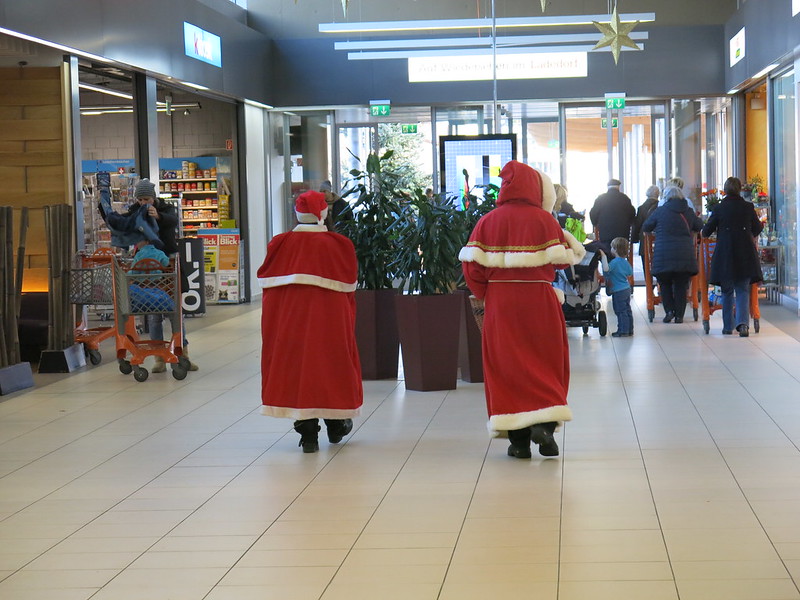 I thought I had seen the backs of these two guys in the supermarket and was not unhappy. Christmas the time of giving and feeling good and collapsing after all the cooking and preparations. I know I am a Christmas Grinch. When the kids were small you just got carried along with it all, buying presents, packing presents, decorating the Christmas Tree and throwing Christmas ornaments everywhere. Do not forget the candles, we must have enough candles to light our way into and through the celebrations.

As a young mother and wife, you put a brave face on it all, welcomed the family to the dinner for 7 or was it 8, might have been 10, but I survived.

“In two weeks time it is Christmas Eve.”

Ok, perhaps not a big deal in other countries, but in Switzerland and a few other European places, it is the beginning of it all. I don’t even believe in all this stuff, but I am not alone in the world, and if everyone else does then who am I to spoil it all. Christmas presents now take care of themselves. We buy our own, or do not buy them. Who cares, it’s the food that counts. I no longer have a Christmas tree, except for the mini version somewhere in the cellar.

So I began to think. Two weeks and we begin to eat as if famine was around the corner. The discussion began.

“On Christmas Eve I will cook something good and quick, no big deal, just expensive. On Christmas Day I will roast something.”

“No, you might not get a good piece of roasting meat if you order it. Make something else.”

“And Boxing Day a piece of cooked ham?”

The logistics are completed. In between we made a few remarks about the poor people in other countries that can be glad to have anything to eat. We also realised not too much meat, we are getting older and no longer appreciate large quantities, which lead to digestive problems. Except for No. 1 son, he eats until there is nothing more to eat.

But I still have 2 weeks to think about it. We are only three people, not an army. I really don’t mind Christmas basically I suppose. Ok I am just the Christmas grinch that is glad when it is over, when I no longer have to feed the five thousand (and he did it on a couple of fish and a few slices of bread). Perhaps I might even have time, after the dessert of course (just some ice cream, whipped cream and luxury fruit) to play with my computer.

Roll on Easter, at least that is the time of fasting, except for the chocolate eggs and bunnies.
Posted by Pat Gerber-Relf at 19:45