When you’re unwell, do you allow others to take care of you, or do you prefer to soldier on alone? What does it take for you to ask for help? 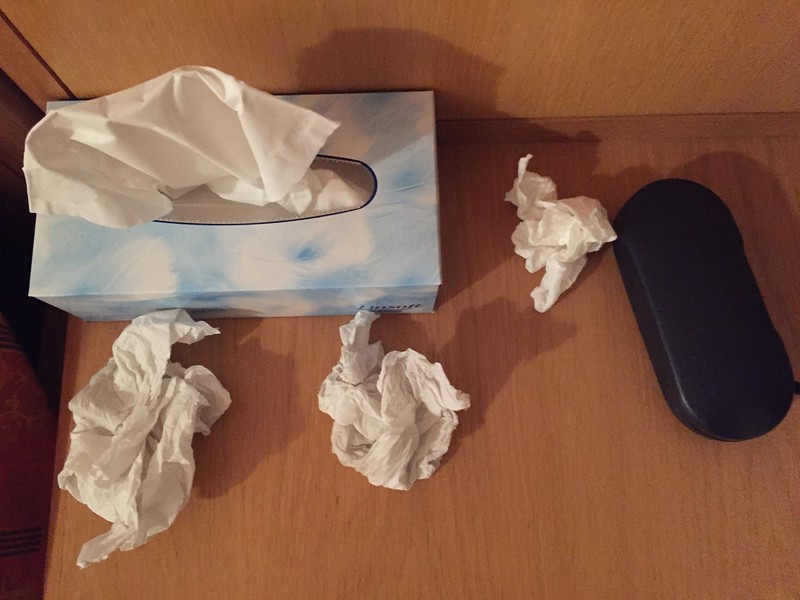 And now WordPress have become psychic, they can see into my bedroom, into my unwell body. Yes I have a cold. Not just a cold but a nose cold. Luckily nose colds are not so bad as throat colds. I really do not know where I found this cold. It all started the day before yesterday when I sneezed. I often sneeze, but it was a repetitive sneeze, one of those sneezes that reminded me every five minutes that it was here to stay.

I dragged myself through the day sneezing occasionally. The problem with an Angloswiss sneeze is that that Angloswiss nose is oversized. It is a characteristic of not only my mother’s family but also my dad’s which means i had no chance from the beginning. In the meanwhile I sneezed again, interrupting my report on my health condition. With such a resonance in a nose it cannot be avoided that all people in my neighbourhood have realised that I have a nose cold.

“What did you say Mr, Swiss? There is no such thing as a nose cold. Either you have a cold or you don’t have a cold, but you cannot have an isolated nose cold.”

“Of course you can. The nose cold is when you get through a box of paper handkerchieves in a day, or even sink to using a paper towel from the kitchen if there is nothing else available.”

He still does not believe me. If I have a throat cold it is much worse. The nose cold is shared with everyone near. They hear my sneezes, my nose blows, and partakes in the general noise emissions from the nose. The throat cold is the incremental factor of a nose cold. My throat is generally quite well behaved. I no longer smoke, since almost twenty years, have no tonsils or adenoids and the passage is quite clear. However, if the cold sinks to the throat I get very benevolent  and like to share my cough with everyone.

The throat tends to make itself noticeable during the day, but you can be ignored by the others, or you can retire to a quiet corner where your coughing attacks remain for yourself. In the night there is a different scene. You slip between the sheets at last to recover from the ailments of the day. Gradually you fall asleep and then it happens. There is a tickle in the throat membranes, and you cough, not just once but often, developing into a coughing rhapsody. Of course you make efforts to disguise the coughs, there might be someone nearby that also becomes aware of your coughing spree which will probably prevent that neighbour in getting his own relaxing sleep.

Eventually in the morning you are awake after many trips to the bathroom to dispose of the used handkerchiefs and notice that you did not really get a full night’s sleep. If you did sleep it has the effect that the coughing excursion is stopped in its path and you have the feeling that there is some sort of blockage in your respiratory organs which produce a clearance cough in the morning for some time, until it is dispersed. That is a throat cold, which is my less liked sort of cold. So how can anyone tell me that there is no such thing as a throat cold.

At the moment I am happy with my nose cold, but my nose is not so happy. It is sore and somewhat swollen, and now has an interesting colour - red. You ask if I ask for help. I do not have time to ask for help because I am sneezing continuously with my nose cold. If it was a throat cold I would be coughing so much that I would not be able to ask for anything. I do not soldier on alone, I share my colds, otherwise there is no point in having one. There is help in the medicine cupboard, but the difference is you can cure your cold in a week, and otherwise it take seven days. I now feel a headache approaching, due to the nose blowing exercises.
Posted by Pat Gerber-Relf at 16:01