So where shall I begin? Perhaps yesterday evening when Mr. Swiss called and said “take a look at the moon.”

“The moon? already a full moon,  is there a vampire winging its way across the garden, or do we have an invasion of glow worms?”

I am prepared for everything in this wide-eyed environment, but now in his charming golden oldie age he is moonstruck. Why not, a few minutes gazing at the moon hand in hand makes a change from looking at the TV.

“And bring your camera” he added. All romantic visions disappeared, destroyed by a simple down to earth comment.

Hiding my disappointment I answered “but I don’t do moon pictures. I have to make special settings on the camera. One tiny shake with my hand and I have a blurred moon, looking like a mouldy orange.”

“No, it is not full moon” he answered so I was relieved: at least no vampires and so I removed my neck protection, not wanting to have puncture marks in my neck from the fangs. We live quite near the cemetery, and the local hospital with the blood bank is just along the road.

I pounced on my super Nikon camera, hung  it around my neck and arrived on the porch to do some moon focussing. Ok, it was a mini moon, one of those new moons, celebrating its rebirth. I took a photo, discovered that I had half of the neighbouring balcony as well as the moon and so took a few more. I discarded three because they were blurred, but decided one was a perfect replica of a newly born moon. In the meanwhile Mr. Swiss had disappeared as the news was now on the television.

I uploaded the photos onto my computer and the news on the TV was finished.

“Do you want to see the photos?” I called from my computer centre. Mr. Swiss arrived and cast his critical eyes on my results.

“Not bad, that is a good one, you can see the rest of the moon in the shadow.”

You see Mr. Swiss is an expert. He knows his moons. I remember when we had not arrived at the golden oldie age etc. etc……

Ah, I got carried away and I know you are all longing to see my fantastic astronomically valuable photos of the moon, so here is the best of the bunch. 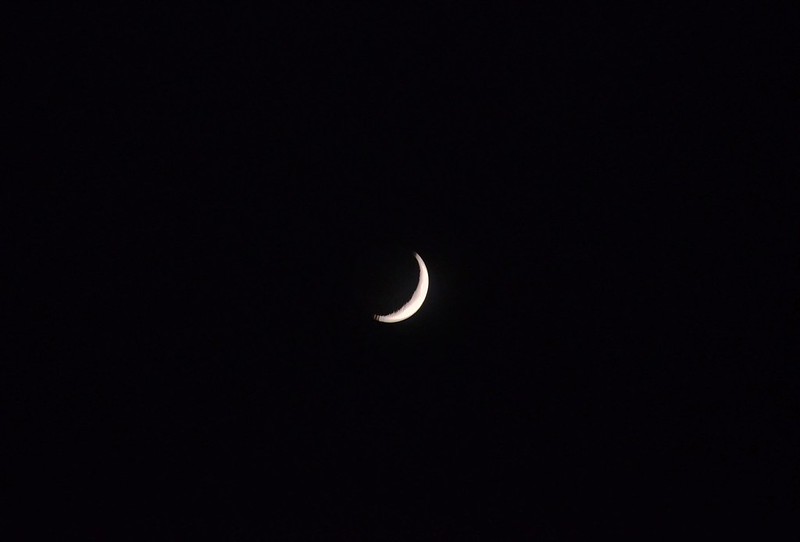 Disappointed? Any fool can take photo of a full moon, but a new moon is something completely different. Note the details of the surface and the sharp outline.
Posted by Pat Gerber-Relf at 17:57