What can I do well? Everything really to keep me alive. I can cook. At least I have not yet poisoned anyone, although this week I had a low with my cooking. One of those days when you don’t know what to buy and cook. Monday was successful. We had polenta with cipolata (you know those small sausages) and peas. The polenta was mixed with parmesan cheese and butter (of course) and it was a success.

Tuesday was doomsday (at least for me). Mr. Swiss suggested cervelat, the Swiss sausage, only available in Switzerland although I believe the skins are imported from Brazil, because they have the best quality for the super cervelat. I don’t mind a cervelat and I quite like it with hashed browns (fried potato - have to speak American colonial here other no-one really knows what I am talking about) and cauliflower: two days if sausages, it can only get better. It was decided that as we had french fries on Sunday, it would be time again for pasta. I like pasta, with a tomato sauce called spaghetti, but I was not in the mood for pasta with my cervelat. So we all sat down to lunch and it was all eaten, but I did not enjoy it. I told everyone that it was the last time I would fry a cervelat and serve it with pasta. 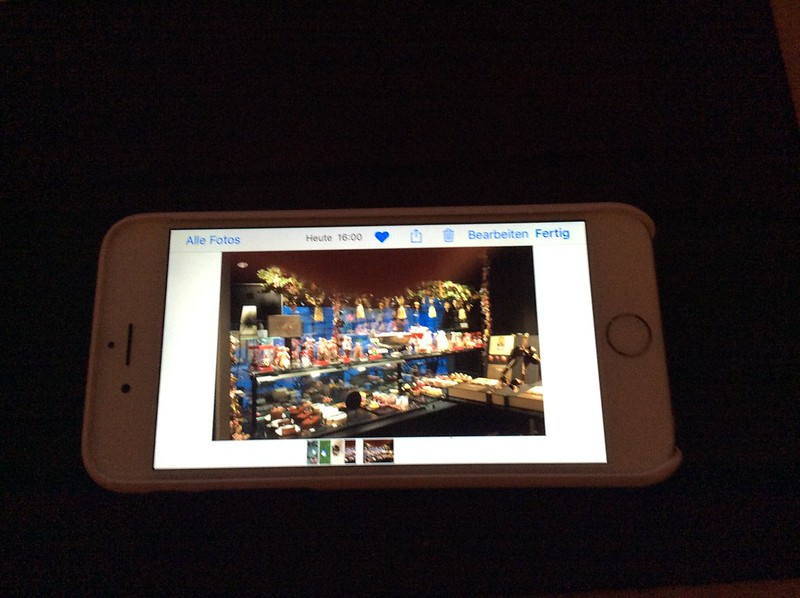 At the moment I am in a photographic form of mind. Armed with my mobile telephone and camera nothing is safe from me. I don’t know if I can do it well, but it is fun. To illustrate my photographic abilities there is a photo of a photo. I took a photo with my mobile which is still on the phone and to illustrate my crafty methods, I took a photo of the photo on my mobile phone with my iPad and then beamed it over to my Flickr site, where all my photos originate on these blogs. I know I am clever, brilliant, ingenious - there are not enough adjectives to cover my abilities.

There are of course a few rules to be followed when taking photos. I took the photo on my mobile phone in a small restaurant where they sell cakes and all sorts of creations. Unfortunately my mobile phone did not spring to photo immediately and I was standing in the tea room and I think the ladies serving in the tea room were a little annoyed, although I did not notice it. Actually the tea room had our Apple shop (computers) in the back room and I just wanted to look around. Mr. Swiss found perhaps I should not take photos in public places. We escaped and there was no damage done.

Oh, come on WordPress, I wrote it all last year and I am really getting bored with these warmed up prompts, just like my caveat with pasta. The cauliflower was also not so good.
Posted by Pat Gerber-Relf at 17:09