Head to one of your favourite blogs. Write a companion piece to their penultimate post. 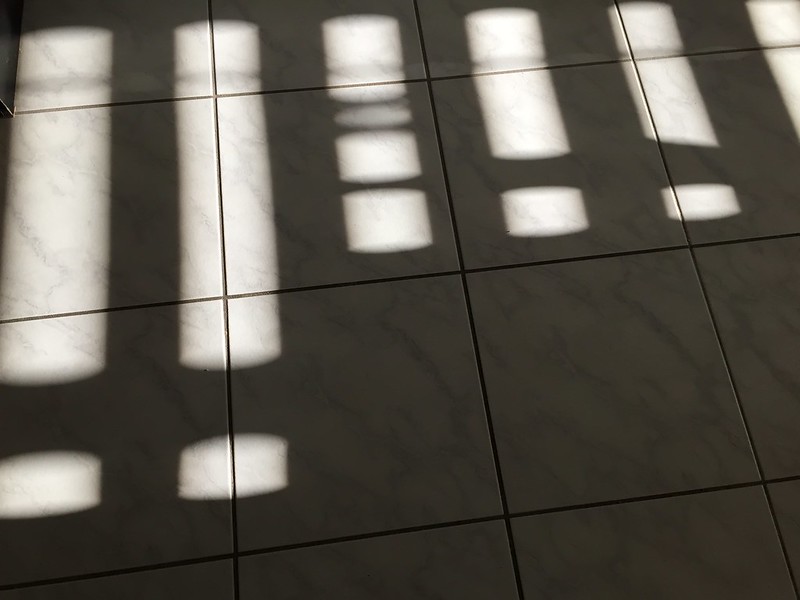 As far as writing companion pieces to penultimate posts? Can you perhaps make it a little easier daily prompt? I am too old for this sort of thing, just a golden oldie trying to understand the hifi world we live in. At the moment one of the PC online guys is fitting our new provider  which is already working perfectly, with the exception of the printer. The printer says forget it, I need a new programme, and so the guy is making a new set-up. In the meanwhile we are all stations go, just like the CIA, everything is working after testing all of our computers. The printer is now doing what it should do and no more profanities are being uttered.

I would title the photo “Confusion” which is the state my brain has at the moment. It is a reflection of the sun shadows on my floor in the hallway. I noticed by the first time with this stupid idiotic prompt that there were few answers because probably most people did not really know what it was all about, or found anything life-sustaining to write.

Yesterday I downloaded the new Apple programme known as El Kapitan, succeeding  Yosemite which succeeded Maverick. It took about 4 hours and another half an hour to configure but eventually it arrived.  Mac programmes always remind me of the Wild West, I am sure the next programme will be called “Wells Fargo”, shooting down the outlaws trying to rob the Apples and the survivors being the Mac-Earps. Mr. Swiss dowloaded his Apple computer this morning. We are now both up to date with everything, except Windows 10.

Mr. Swiss has Windows 10 on his two Windows 8.1 computers and it works perfectly. I just had a word with then PC guy that was fitting up our new provider and I asked him about adapting my Windows 7 to Windows 10. He said there should be no problem, although some people find it goes slower. I told him I have decided not to go for it, I don’t like risks with computers and I do not like the photo programme on Windows 10. I have a lovely photo programme on my Windows 7, it does everything I want it to do. I have decided to wait and see. When the time comes and my Acer windows 7 draws its last online breath I will consider either a replacement with windows 10, or carry on with my super Macbook until I want a bigger and better Macbook, which does not yet exist.

In the meanwhile I will battle my way through these daily prompts, sending the baddies to Byte (Boot?) Hill and hoping for one of the good guys that will give me something new.