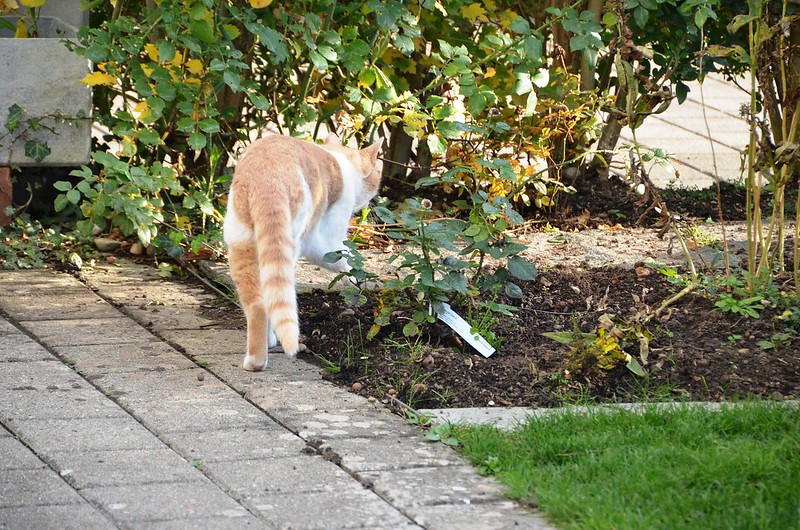 “I so wish that the feline leaving my territory was just an imaginary feline.”

“But Tabby, that is Roschti, your long time companion. He has been here almost as long as you have lived here.”

“Exactly Mrs. Human, that word “almost” tells it all. I was here before Roschti. I even remember when Roschti left us because his human moved away and Roschti decided to try out the new territory. Roschti returned after a week and took over the house belonging to a neighbour of the human he owned first of all, bordering on my territory.”

“Yes Tabby, I remember. He just did not want to leave the place where he had been living for so long.”

“Rubbish Mrs. Human, he was after my territory and still is. Many are the hisses and meows that have been exchanged in the face of a territorial fight, but up to now I have managed to stand my ground.”

“And run through the cat flap. But he is taking a walk though your territory at the moment.”

“He is just passing through Mrs. Human on his way to his own place. He respects my rights.”

“You don’t think perhaps he just wants to go home to a dish of tuna perhaps.”

“Who knows, he is a slave to the tuna fish. You see how inferior he is.”

“Err Tabby, I thought I might serve tuna fish this evening.”

“Tabby where have you gone so fast? The dish is still empty, I havn’t filled it yet”

“Then hurry up, no self-respecting feline has to wait for his tuna fish.”

“But you were saying something about Roschti being a slave……”

“Not important, Mrs. Human. Do not compare me to Roschti, there are times when his ideas are just imaginary.”