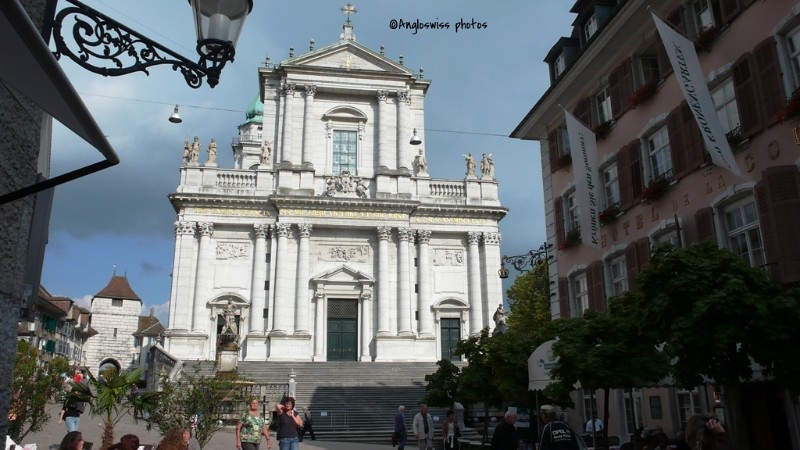 Those that are catholic know what I am talking about, those that are not might also know what it is all about. I live in a Roman Catholic area and so we celebrate all the Roman Catholic high days and holidays and today is one of them. It is something to do with the ascension of Maria I believe. Do not ask me more as I am not an expert. We even have our own catholic cathedral, St. Urs,  which stands in the old town of Solothurn. The chief of the whole organisation is the bishop of Basel, although we are in the Kanton of Solothurn and his palace is in Solothurn: a building just along the road with all the trimmings. I do not know why he does not have his palace in Basel, but perhaps they did not have enough room to build one, or Basel was not so nice. I quite like Basel actually. The funny thing is that Basel is not a Roman catholic area, so hoards of Solothurn inhabitants are today all boarding the trains and their cars to perhaps go to Basel where the shops are open. It is just a quick jump across the border to Germany or France from Basel. Although Lörrach being the nearest town in german is also Roman Catholic, so will also be closed.

Yes, that is the disadvantage of celebrating a catholic holiday, everything is closed.There is no possibility to go shopping for food or other necessities. I did my shopping yesterday in the local supermarket, being careful to remember everything, because today it will not be possible to buy. The locals were quite civilised in the supermarket and there was enough room to move and pursue the shopping tasks. There was no mass hysteria because today is closed. We Solothurn people are used to these days of closure, of no food buying possiblities and remain calm and cool.

Of course Mr. Swiss and I made a neat list and ticked off the items we needed for the week-end. It was only a few weeks ago when the Swiss National holiday, 1st August, fell on a Saturday, so we then had a rehearsal for today. Everything went well and we did not starve. However this time I made a mistake, almost a grave mistake. I decided too cook a veal ragout for Sunday lunch. I even told the butcher to give me three marrow bones to make a nice viscid sauce. Three bones because we are three people and it is a special Mrs. Angloswiss delicacy to eat the marrow from the bones with the meat. Everything was prepared and then I notice that I only had a thin layer of gravy powder left in the container. This is an important ingredient to my prize suspicious cooking method of veal stew. Not only the marrow bone, but the gravy powder is a crowning ingredient.

My son to the rescue. My No. 1 son decided to escape from the tranquility of Kanton Solothurn today and visit the town of Zürich, which is an hour’s train journey. Zürich is a Swiss reform church area, Ulrich Zwingli being the founder of the church, from the area around Zürich and so the Zürich people had a normal Saturday and gravy powder would be available. My son loves to make train journeys, especially on a free day. He is autistic, but has no problem is finding his way around. If he is given a quest, such as the search for a tin of gravy powder, he will find it (in between his visit to the Zürch MacDonalds and other favourite places in Zürich). He will be the rescue of the the Sunday dinner. I can rely on him.

In the meanwhile we have a quiet day at home. When I was a working lady I was glad for a religious holiday in between. Now being a golden oldie, it is not the same. I may even take a walk if the rain stays away, although come to think of it, everyone will be taking walks today. There is a danger of overcrowding on the forest paths.

As I finish writing this memorable blog I can hear the church bells ringing from the cathedral. This belongs to the day.
Posted by Pat Gerber-Relf at 15:38