You get to spend a day inside your favourite movie. Tell us which one it is — and what happens to you while you’re there. How can you spend a day inside a movie? Silly expression “fourth wall”. Were did the other three walls go and why do you have a wall in a movie.

I don’t think so, this is not a prompt that is a good idea to repeat, now is it? Of course for the newbies an interesting theme, but for someone who likes to write daily a disappointment. 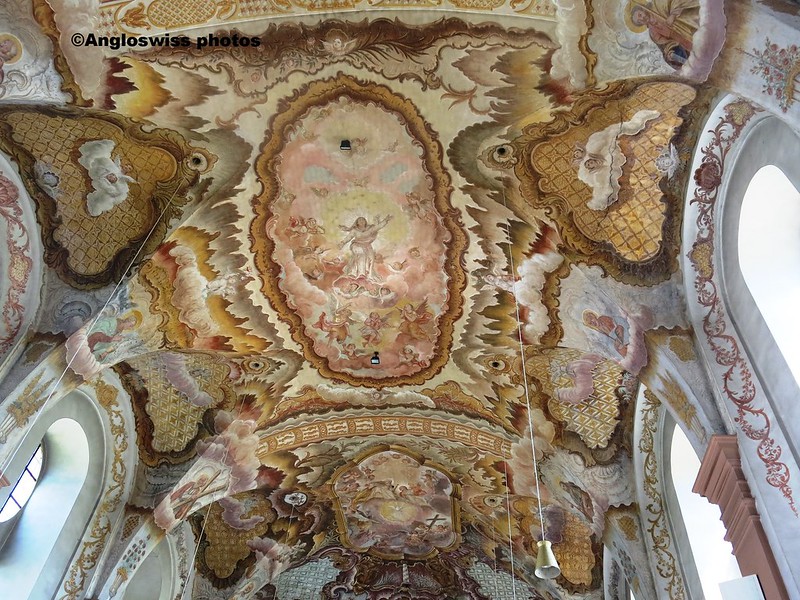 I am afraid that taking photos of walls is not very interesting, but here is the photo of the ceiling of the Kloster church of Springiersbach in the Mosel area of Germany where my son was married a couple of weeks ago. I was seated in the church waiting for the action to begin and passed the time with taking photos. I found the ceiling to be a nice piece of work, something completely different, so here it is.

As far as favourite movies are concerned, I no longer really do movies. The last one I requested Mr. Swiss to upload was Noah with Russell Crowe and this proved that I should not bother. I thought it would be one of those fantasy films with strange animals and lots of action. The animals had as much fantasy as the snail population in my garden and action was boring, so I decided yes, no more films. Read the books, at least you have an original in your hand. I read the Noah story in the bible many years ago and am always on the lookout for an elderly gentleman with a long beard accompanied by his family on a large wooden boat marked with the name “Ark” if we have heavy rain storms. You never know. My felines have already signed up for the maiden journey having visions of being the first on landwhen the waters recede.

I am afraid I have no idea today what to write. Telling everyone about how I cleaned the bathroom this morning would be boring, we all have our bathrooms to clean. I could tell you all about cooking lunch, but unless you get an invitation to eat with me, it would also be uninteresting. By the way it was chopped chicken with curry rice accompanied with mixed fruit and garnished with some whipped cream. Oh, a pause in the exciting life of Mrs. Angloswiss. Mr. Swiss has just joined me outside on the patio.

“Writing a blog?” he asked.

“Yes”,  I answered and continued “but the shit blogs are becoming boring and I no longer know what to write.”

He ignored the word “shit” (crap in American for those that might not understand) and continued “they are bringing repeats every day like the television programmes.”

You see even Mr. Swiss, who never blogs, knows the problems of a blogger when confronted with the same thing every day. I think I will come to a close, see if my felines have a good idea about a fourth wall on their blog and afterwards take a walk to clear the blockage in my head. Perhaps the fourth wall is a secret code. Our blogging world is being infiltrated by creatures from a fourth dimension, slipping out of the cracks in the walls and into our brains. I can see one now appearing out of the tiles on the floor and stretching its slimy feelers towards the keyboard of my computer.

Return tomorrow for a further episode in the serial of “Mrs. Angloswiss kills the invaders from the fourth dimension of the daily prompt.” On the other hand forget it, it will be the same old prompt from two years ago probably.