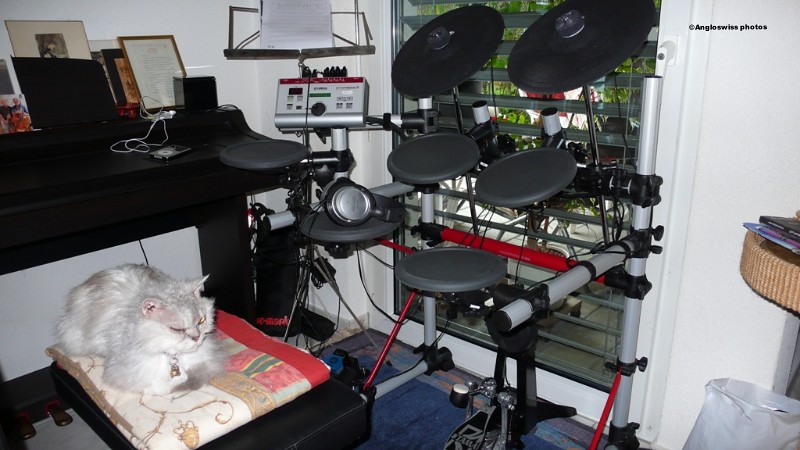 “Fluffy, stop showing off. You never played with that electric drum set, it just happened to be there.”

“I didn’t say I did Tabby, but it looks good. Everyone thinks I can play the drums.”

“I remember my first plaything as a kitten was a mouse. That was fun and mum said it was the fundament of my education.”

“I had a mouse too Tabby, but it was not a real mouse of course. One of those feline toy things, although it was stuffed with catnip.”

“Sounds like you had a sheltered upbringing Fluffy. I got the real thing.”

“Lucky you, I had to wait until I adopted Mrs. Human, she had enough real mice outside. Did I tell about when I caught my first mouse. It was actually still alive and so I ………”

“Fluffy, this is a child free blog so spare the details. Humans prefer to see it all on the TV where everything is digitally changed and they don’t want their kittens waking up screaming in the night with visions of mouse remains. They are not into the real thing like us felines.”

“It is not important, we live in a real world. Humans like to pretend now and again.”

“My favourite pastimes were playing with things stuffed with catnip. You could really have fun sniffing them and wrapping your paws around them.”

“I savoured every sniff Tabby, although I fell asleep afterwards and had weird dreams.”

“Exactly, the essence of getting high on catnip..”