If you were asked to spend a year living in a different location, where would you choose and why?

I no longer do abroad. I did it 46 years ago and am still here in Switzerland. Once a year I go abroad to visit dad in England and this year I will be going abroad for my son’s wedding in Germany. Not really so far away, but too far to drive so we take the train, a mere 8 hours one way - fun. No, at my golden oldie age abroad is a journey to the next town, or a walk in the local countryside. 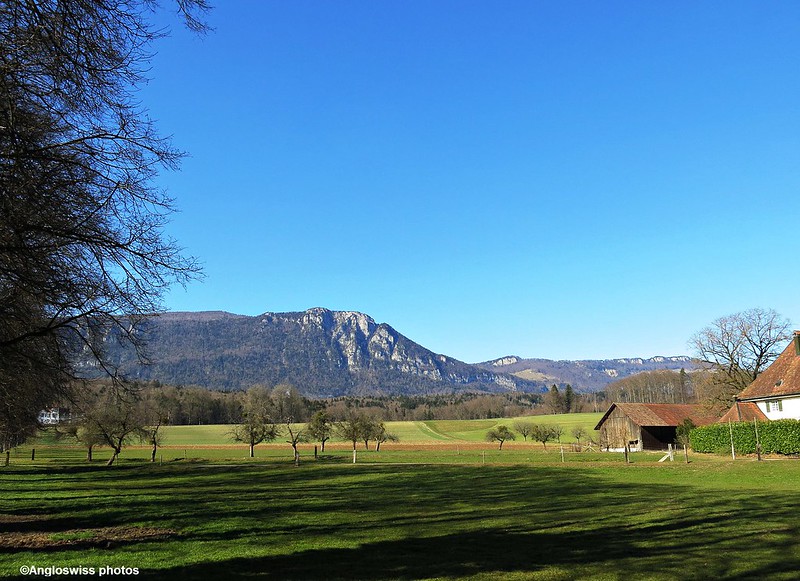 Yes, I did it again and survived. The photo is of Balmfluhköpfli and surroundings, take just across the road from where I live and the beginning of my afternoon survival training with Mr. Swiss. Today I had stress. This morning the gardener arrived at 7.30 a.m. and began the revival work on my garden. I am still happy to see the fantastic results and I did not have to raise a finger, arm or anything else. I just watched. Now and again I  offered the gardener some advice. I am good at giving advice, but people do not always listen. Such is life.

After my golden oldie sleep at lunchtime I had my Thursday half hour cleaning session on the shower. I needed another half hour to recover, but then I was ready to go. Mr. Swiss was waiting and so I put on my special walking shoes and athlete style trousers and t-shirt and we were away. This time I needed a warm jacket as we had our so-called Northern bise wind, which is more like an ice cold mini hurricane.

We again took the path past the chicken run and the stables. This time I was lucky. In the local stables they have many horses, but there is one particular horse I saw this week before he disappeared into his private apartment. Today I was lucky, he was outside hoping for the chance that I might pass by and take a photo. I took three photos. All were quite good, but on two he was sticking out his tongue. I was lucky with the third photo, and here it is. 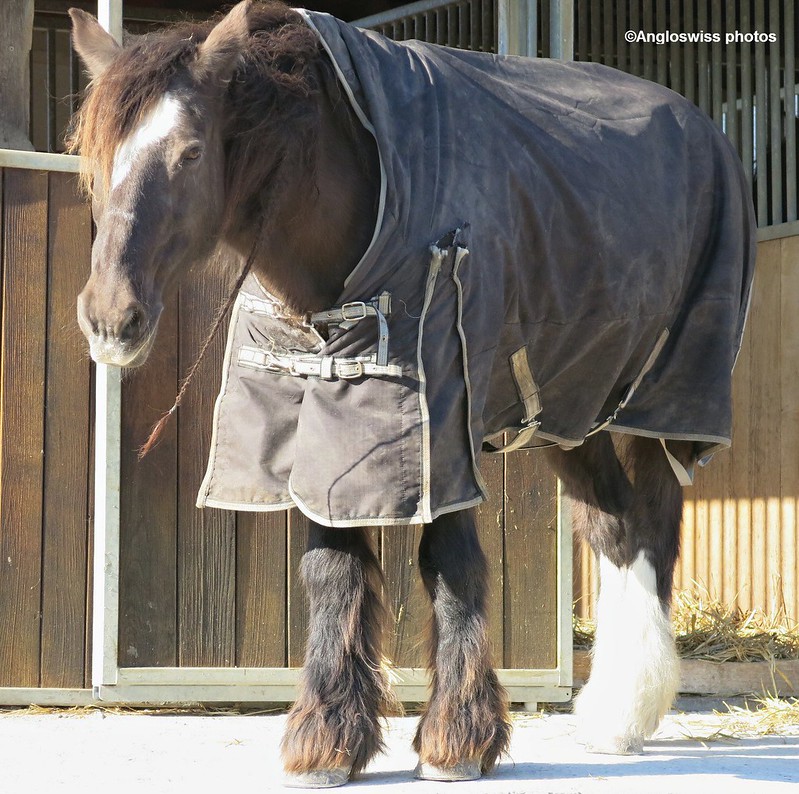 I am not so good at horse names. Mr. Swiss calls it a hollander, but if I remember rightly it is what I know as a Carthorse. Those lovely horses that used to pull the beer wagons in London with the long fur over the foot. They represent the real horse for me and I believe a very old breed. Each farm would have its carthorse to pull the plough in the earlier days. They are strong lovable horses and it is no longer so often that you see them today. The horse gave me a goodbye wave with his tail and we moved on, propelled by the strong wind. The next stop was the cemetery, but Mr. Swiss decided to take the side entrance for a change which meant instead of beginning by the cremation graves, we were amongst the kingsized bought private family graves.

It was a quiet day today at the cemetery, after all not everyone is a cemetery tourist like some people. Mr. Swiss took my photo on the cemetery bench and I took his. When I uploaded the photos onto the computer I marked mine private, for my eyes only for a good reason. I had the idea that being tall you are relatively slim. I will not go into details but I asked Mr. Swiss have I really put on so much weight? For this reason my photos here are of the local scenery and a horse and not of me, although the horse is nearer to me.

We continued and were soon on the home stretch. I ask myself whether these daily walks are really worth the effort. When I arrive home I need ten minutes to recover. I also notice that I have muscles in places where I did not know they existed. After spending an hour uploading photos, giving them names and organising them it is time for the evening meal. How time flies when you are enjoying yourself on a fresh breezy walk.

Tomorrow is Friday, another afternoon with nothing to do, so perhaps it will be another venture into the unknown, anything is possible. If you do not see my daily contribution tomorrow, I might be taking a walk up the local mountain. I did suggest it to Mr. Swiss, but he found I am overdoing it somewhat.

Click here for more
Posted by Pat Gerber-Relf at 19:53