Tell us about something you would attempt if you were guaranteed not to fail (and tell us why you haven’t tried it yet). 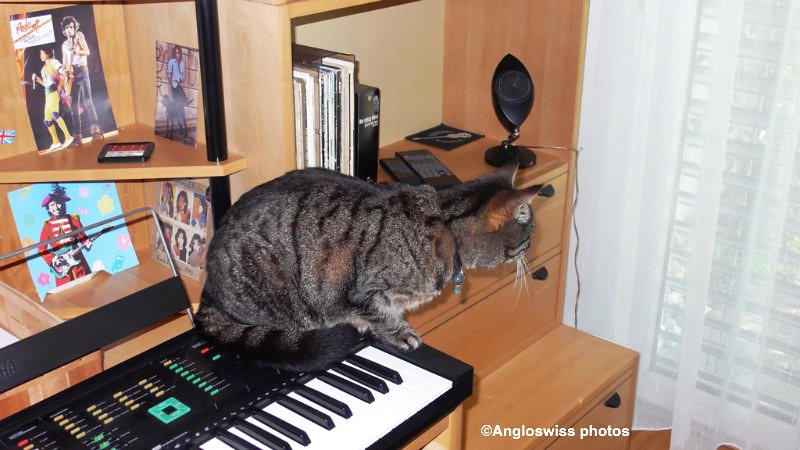 “Silly question. The paw friendly piano has not yet been invented. How I wanted to play a few bars of the Feline Moonlight Sonata by Ludwig von Beetkatz, but there was a problem with the rhythmic flow of the ripples on the right paw and my span was not large enough on the left paw.”

“I noticed Tabby, it seemed to me that the co-ordination was lacking. If the piano had been designed for four paws it would have been easier.”

“Fluffy, it is one of those devious plans of the humans. They know that we felines can do anything and they are jealous. For the same reason bird feeders are in high places. If they were on ground level, we would have success with our bird food supplies.”

“But Tabby we can do anything, after all basically we are gods. In the old country we were worshipped for our talents. There was no corn chamber safe from the mice, we kept it all to a minimum.”

“True, we just allowed a minimum of mice to survive, after all we had to maintain a level of food supplies for the feline gods. Now to the realities of daily life. I am sure we could open the tins if we concentrated enough.”

“Tabby, you mean by applying mind over matter. If we concentrate our feline brain waves, the tins will open on their own, of course. Why didn’t we think of that before.”

“Because in Chapter 838, verse 21 of the book of Bastet it says “felines should keep their brain powers to themselves. It would cause uncertainty in the human race and there might be a repetition of the middle ages and we felines all know what happened in the middle ages.”

“You mean witches,  black cats and burning at the stake.”

“Yes Fluffy, although we survived. We just transferred to another dimension and when it was over, we returned.”

“Of course, we survived, we can do it. Let the humans continue to open our tins, otherwise they might become depressed not having a purpose in their lives.”


Click here for more
Posted by Pat Gerber-Relf at 19:38