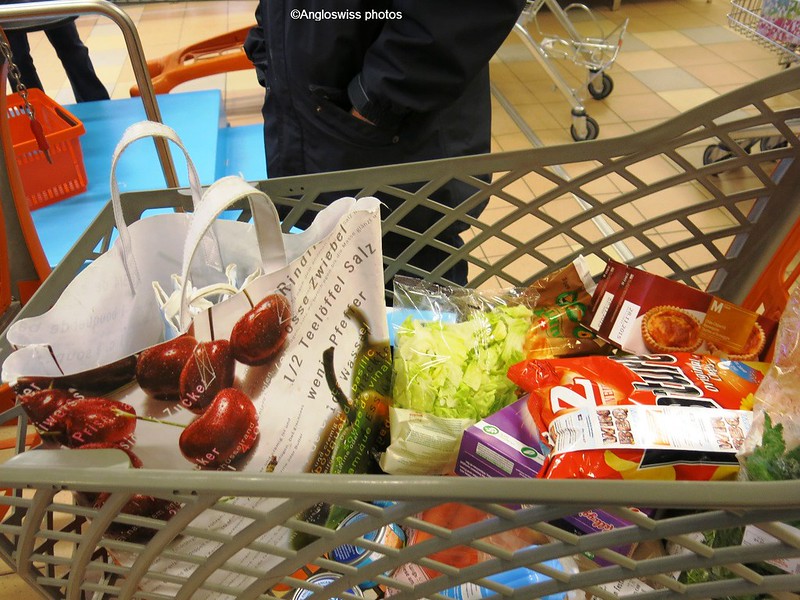 Naturally the prompt I wrote in 2013 is about the best thing since sliced bread. It was not a bad prompt and I told everyone about it, mainly that I do not like sliced bread. Now two years later I have to find something else to write. I do not have to, but I will, because I have nothing that comes to mind to otherwise write about.

The problem is what shall I write about? Yes, I could write about the computer, but we all write about the computer, so something completely different. To take a photo in the supermarket would not have been possible a few years ago. First of all because I would not have a camera in my handbag, or for that matter a mobile phone. No, I would have been without a photo of my daily buying spree. Unfortunately the meat and cheese stuff is buried  beneath the salad, cereal, frozen cheesecakes and a large bag of potato chips, but it is a digital camera. Mr. Swiss did mention I should hurry up, the lady at the till is waiting, He is even on the photo in the background.

So let us praise the digital camera where we take photos of stuff we would never take in the pre digital camera days. Our family camera was reserved for holiday photos when you bought a roll of film and inserted it in the camera, accompanied by many profanities because those cameras were never easy to handle. The results were usually blurred images of people dressed in bathing suits and perhaps with a sharp ray of sunlight cutting the photo in half as if a curse had been pronounced on the image. The photos were naturally all in black and white, at least ours were. We could not afford coloured film and it did not come into the question.

I would probably have ignored photography as a pastime, something to have fun with, were it not for Mr. Swiss. Yes, he is my inspiration in all new developments (although he never did become a friend of the Apple computer - another story). The first progress in the camera world was a 35 mm camera, which did not really make an impression on me. Then the instamatic cameras arrived which were OK, but not the egg yolk of photography.

One day Mr. Swiss brought the first digital family Angloswiss camera home. I was still not impressed, but at the time I was busy changing diapers and bringing up the next generation. One fine day Mr. Swiss decided on a new digital camera offering me his old camera. I took this object in hand, pressed the button and I had action. I pressed the button again. after a year and a few hundred photos, I bought my own digital camera. That was the first of many. No-one was safe from Mrs. Angloswiss, I had become the female version of Ansel Adams, although he did it all in black and white and developed it himself and I was in full technicolour online. Perhaps I was more a female Walt Disney. No-one and nothing was safe. I was taking photos everywhere. Now the digital age was upon us, and a grey haired lady armed with a camera was uploading her photos onto the computer. I now have over 10,000 online, although not all public.

In the meanwhile I had bought a Nikon DSLR camera. Mr. Swiss was still hovering in the background with a normal average digital camera. You will find me in the supermarket, on the street, in the train, at the airport, in the garden, in the home and even perhaps squatting in an awkward position in the garden attempting a photo in the life of an ant or bug. As the years passed I gave up with the squatting as I discovered it became increasingly difficult to regain an upright position. My interest in the microscopic life of insects was discovered. There was no spider safe from my lens. Even flies were photographed in all sorts of positions.

I take a photo of each and every orchid that enters the home. Unfortunately a disruption of ornaments is necessary to place them in the right place for ideal light and I tend to forget to replace the ornaments in their original place. “What did you say Mr. Swiss? That bowl of oranges does not belong on top of the television? Ok I will return them to their normal place of rest.” As you see my photographic talents are sometimes ignored. I am sure that Ansel Adams did not have to be careful where he put a bowl of oranges when he was taking one of this prize suspicious works. Even I now sometimes do it in black and white. With a computer, photoshop or whatever the programme is, everything is possible.

So I did it again Daily Prompt. I wrote a second prompt on a prompt that I had answered two years ago and I do not care. You will not stop me, I will continue despite all obstacles cast on my path to daily prompt fame. I am very seldom at  loss for words and I will win. I will probably be the last remaining prompt writer in the history of the Daily Prompts, just bring them, I will do it.

Click here for more
Posted by Pat Gerber-Relf at 17:05