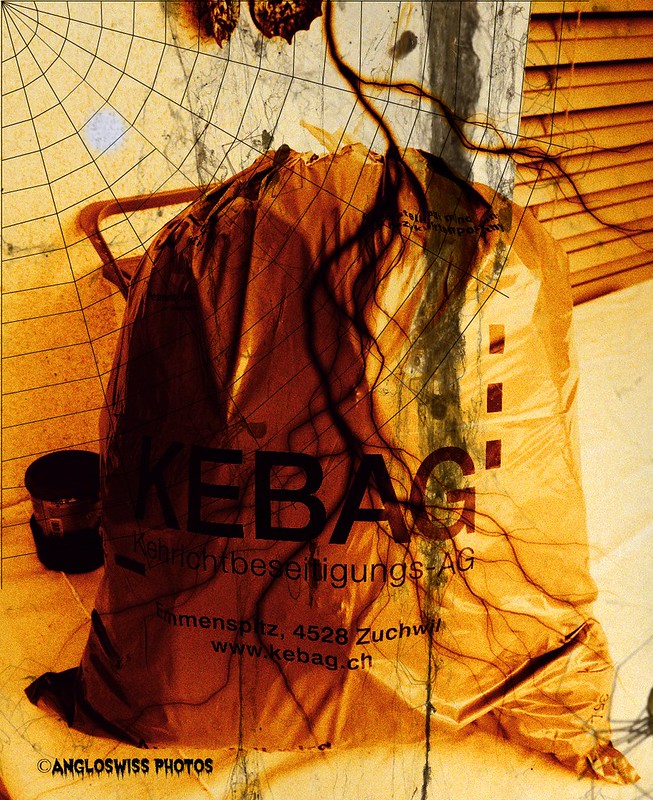 Who is this guy called Morton? Aha, some sort of distant cousin to Hobson who gave us a choice but was really no choice. Reflecting on the memorable day 5th December 2012 when I wrote my epic blog Hobsons Choice I really do not have more ingenious thoughts to add to the subject. Perhaps the question would you rather shoot youself or take poison would  be appropriate. Another thought: 5th December was the day before my birthday, I became 65. I had fewer grey hairs.

“I was just taken the garbage out.”

“Great, leave it where it is.”

“How did you guess.”

The bags are probably worth more than the contents, one Swiss france each. Actually I wanted him to take a large meat knife in his hand and take a photo as it was descending on the computer, but I changed my mind. The garbage was also a good solution and I could even dress it up in a photo programme. But what does the garbage contain? You do not really want to know, but let us just pretend it contains all those old prompts where we have been there and done it.

I was slowly awakening from my midday golden oldie sleep. Actually it was rather a prolonged sleep today due to falling into the world of dreams and having a semi nightmare. Luckily I cannot remember what it was about. I stretched out my hand and found my iPhone which told me I had actually slept thirty minutes more than usual. Who cares? I restretched out my hand and took my mini iPad to see what daily prompt the Wordys of this world had prepared for today’s blogging experience. I noticed they had not prepared very much at all, but had some leftovers from 2012. Yesterday was also leftovers, most days are leftovers, but where there is a will there is a way and I want to write. My mum always told me to clear my plate, she did not like leftovers. I want to send my wise words forth into the world, to show that I can do it. And so I am now doing it. But what am I doing, I am throwing the old prompts out with the garbage, figuratively speaking.

I am sending them to a place where they will never return. They will rot, disintegrate, enter the land of dead blogging. Yes, the Dead Bloggers Society, sounds good. They could make a film about it. Of course, it does not have to be so negative. There could be a canonized Blogging Society, where those that wrote unforgettable blogs, like myself, would be honoured and revered. A monument would be erected to the memory of the bloggers that inspired us to blog forever with their names engraved for an eternal memory “They made the right choice”.

What is the right choice? Do we write or read, this was the original question. We do both. We write our blog and we read the other blogs. You never know someone might have written something better than you, had a better idea. Your blog will be torn apart, ridiculed, ignored. You feel you have failed the universal blogging consortium. You will never take a blog into your computer again. You are worthless and above all you begin to hate the other bloggers. Let us also put them into the garbage bag.

Your blog is reduced to a shadow on the blogging path. You know that sidewalk somewhere in Silicon Valley where one day you hope to bend to your knees and place your keyboard into the fresh cement and write your blogging name above it, to be remembered by the blogging generations  to come. It is called “Walk of bloggers” and you will arrive, but first of all eliminate blogs that are in your way, throw them into the garbage.

Oh dear, you see, my negative forces had been drawn out today, and all because I was given Morton’s Fork. Yes, the fork also goes into the garbage.

Click here for more
Posted by Pat Gerber-Relf at 16:59